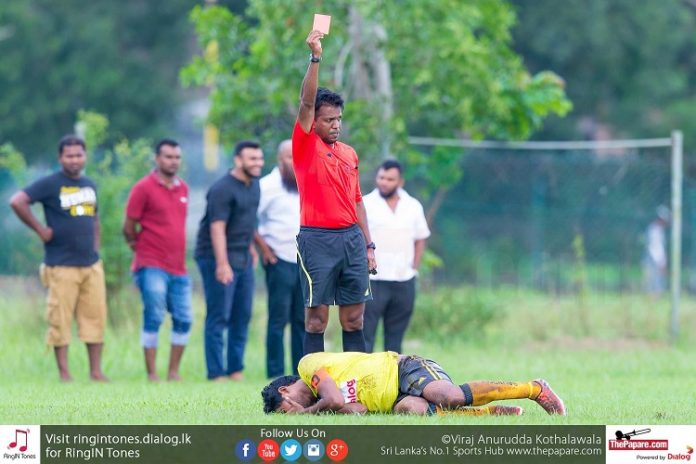 The scheduled matches of the Dialog Champions League were postponed this weekend and the reason is reported to be due to the Sri Lanka Football Referees going on strike claiming the Football Federation of Sri Lanka (FFSL) had failed to pay their match fees.

Reports suggest that the referees have not been paid for 3-4 months since the start of the Dialog Champions League, but sources close to the referees claim that it is as long as 1-2 years.

A day after getting married, Mohamed Rifnaz produced an inspired captain’s performance as championship…

It is revealed that the strike was called on Saturday 25th November morning just hours away from the start of the game-week 14 matches, which saw the 2017 Dialog Champions League (DCL) matches to be postponed. The sources also reveal that the same fate has befallen the Premier League Division I matches.

When contacted by ThePapare.com, the General Secretary of the FFSL Jaswar Umar had this to say;

“Since the final few weeks are crucial matches in the Dialog Campions League, we wanted to put the top referees for those matches. All of them were abroad attending an AFC course when we confirmed them for this weeks’ matches. Upon arriving some of them had injuries and the others were unavailable so we had to postpone the matches. We will be using our top referees (Dilan Perera, Nivon Robesh, Kasun Weerakkody, Ashantha Dias and Irshad Farook) for the remaining matches in the DCL and Division I as main referees.

There is no truth to the fact that the FFSL had not paid the referees for a long time. We had initially paid them an advance and the last payment was transferred last Thursday or Friday. There will be a few matches for which we have not paid and those will be paid for once the necessary match reports and documents are handed over to the FFSL,” he added.

Only one match, Super Sun SC v Renown SC, was played yesterday while the FFSL was forced to postpone the other matches. The DCL match which was played, was refereed by Nivon Robesh and his three assistant referees who had arrived in the island on the morning of the match after completing an AFC Referees course in Dubai.

The current situation has put the country’s top most league tournament, Dialog Champions League, in jeopardy with just 4-weeks left till the finale in Jaffna. It has also placed cash-strapped clubs in a difficult position.

One such club, Crystal Palace FC from Gampola, had already entered the Southern Highway on their way to Matara to face Matara City when they were notified that the matches were postponed. Army SC were already in Kurunegala, on their way to Anuradhapura to face Solid SC, when they received the news.