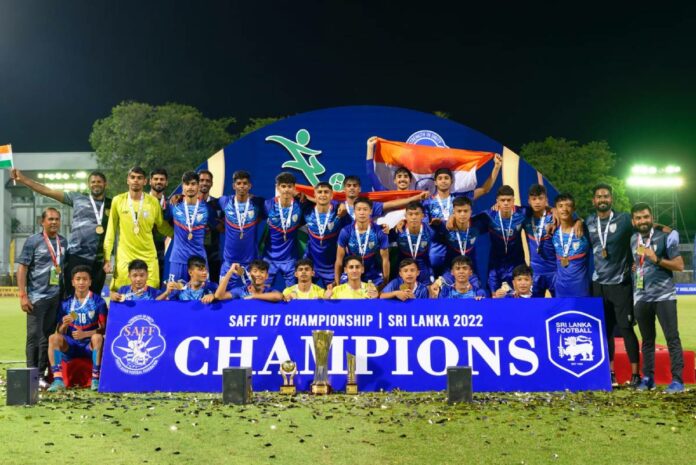 India produced a clinical performance to defeat Nepal 4-0 in the final to clinch the SAFF U17 Championship 2022 at the Racecourse Stadium.

Nepal came into the final after having beaten hosts Sri Lanka 6-0 while India had a close 2-1 win against Bangladesh in the semi-finals. Nepal had earlier beaten India 3-1 in the group stage.

Nepal had the early possession, but India quickly settled to dominate the match. Boby Singh opened the scoring in the 18th minute connecting a header from a Vanlalpeka Guite cross. Skipper Guite once again provided a delightful through ball for Korou Singh who made it 2-0 in the 30th minute.

Matters became bad to worse for Nepal when their captain Prashant Laksam was sent off for violent conduct before half time.

Ten-man Nepal fought hard but India were too good, as Guite added the third in the 63rd minute, where his intended cross snuck into the goal at the far post past Krishal Moktan. Moktan had a good game making several saves but was unable to deny Aman in the 90+3rd minute as India scored their 4th.