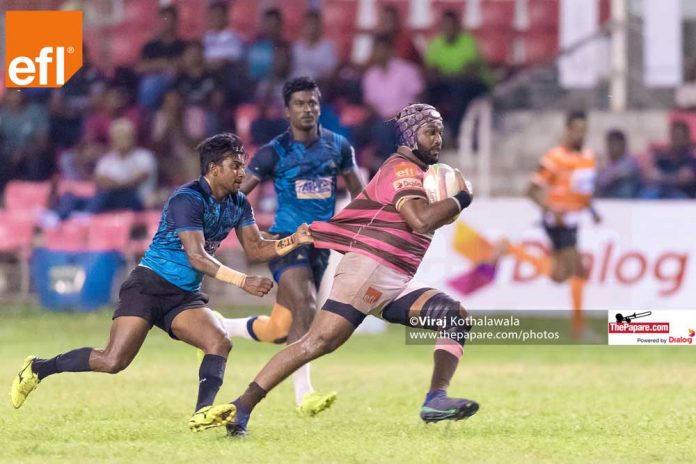 Havelock Sports Club managed to win a crucial game against a struggling Air Force outfit 35 points to 06 in their Dialog Rugby League encounter played under lights at Havelock Park.

Gayantha Iddamalgoda kick started the last game of week 11 as Havelocks targeted a bonus point victory. Havies started attacking from the word go, using their forwards, but desperate defensive work from the Airmen kept the Park club at bay.

ThePapare Most Popular Rugby Player contest is back

Havies’ forwards had a few opportunities to score but took a few minutes to settle in with their forwards playing a few phases out. Scrum Half Vimukthi Rahula made a flat pass to the winger Chamara Dabare to score the first try as he was too fast and powerful for the Airmen. Rizah Mubarak bisected the uprights from a tight angle. (Havelocks 07- 00 Air Force)

The Airmen added a three-pointer when Senal Deelaka was caught by the referee for a seat belt tackle and Iddamalgoda obliged with an easy kick through the sticks to reduce the deficit. (Havelocks 07- 03 Air Force)

The Airmen went down to fourteen when Ramzan Amith was sent to the bin when he tackled Vimukthi Rahula in the air but the Havies struggled to execute the rolling maul as the experiment of Liston Flanty throwing in to line outs didn’t work; Coach Sanath Martis had to bring in Azmir Fajudeen.

Shawket Lahir made a vital break through the Air Force defense, fending off four defenders and gained 40 meters as the Havies then managed to spread the ball wide as Rizah Mubarak had an easy touch down. Mubarak managed to convert his own try from the touch line. (Havelocks 14- 03 Air Force)

Air Force managed to add another three points before half time as Iddamalgoda slotted in an easy penalty when Havies were deemed offside in the breakdown. (Havelocks 14- 06 Air Force)

Havies managed to score their third try when their forwards played a few phases and made important strides towards the try line. Replacement Scrum half Mithun Hapugoda spotted an opening in the blind side and sent Shawket Lahir over the line; Mubarak added the extras. (Havelocks 21- 06 Air Force)

Nippy Scrum half Hapugoda made another impact to this game as he broke the Air Force advantage line and then made a timely offload to Sandun Hearth whose superlative running angle got him over the line for the bonus point try. Mubarak kept his 100% record intact as he slotted in the conversion. (Havelocks 28- 06 Air Force)

The Airmen struggled in defense while e  continued to attack using their forwards as Shawket Lahir picked up the ball from the breakdown and went past the Air Force defense to score his second. Mubarak slotted in the easy conversion. (Havelocks 35- 06 Air Force)

Havies lost their playmaker Hapugoda when he was tackled late by Rumesh Wasantha and swung a punch at the Airman. Wasantha retaliated with another punch and both of them were sent to the bin by referee Abeykoon.

Havelocks managed to defend the final few attacking moves from the Airmen and secured an important bonus point victory.