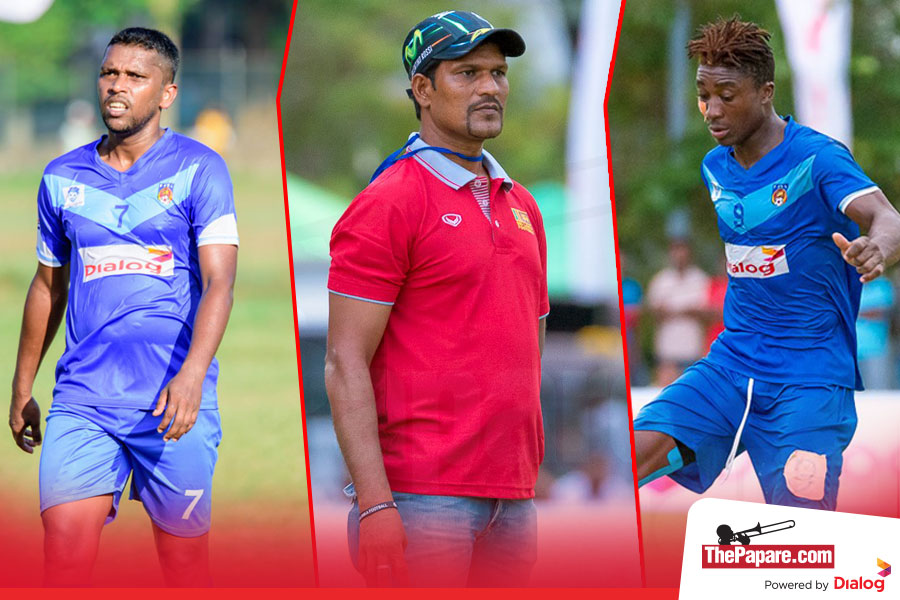 Blue Star SC Head Coach Chandradasa Karunarathne believed the four goals they conceded early on while they were settling down killed off their chances of a victory.

Blue Star had high hopes of winning and securing the Dialog Champions League which came crumbling down in the opening 23 minutes as Army SC scored 4 goals and went on a rampage to win 7-3 and crush the Blue Star dream.

Blue Star SC saw their Championship hopes ripped into pieces after a marauding Army SC stormed to a 7-3 win in a 10-goal thriller at the 2016 DCL Finale..

“It was a tough game and it was very difficult after we went 2-0 down after 8 minutes and it was always an uphill task. Though we scored to bring it back to 4-2, we were playing with our defenders up and it left us exposed,” Karunarathne added.

“It was a difficult ground, nothing like we have ever played on. It took us a lot of time to settle down and in that time Army had scored 4.”

Blue Star was hampered by injuries and player unavailability leading upto the match. One of their key players Mohamed Rifkhan left the country 24 hours prior but Afonja Jibola, E.B.Channa (both hamstring) and Mohamed Farzeen (knee) made it to the starting XI though suffering from severe injuries.

“It was always tough as both of them are key players in my line up and we really missed them today,” he added.

Farzeen only lasted a few minutes on the pitch as he was substituted by Mohamed Najeem.

“Farzeen did say he was okay to play that’s why I played him but saw he was not upto the task, so I replaced him. By that time the damage was done. When Najeem came on we played with five midfielders and played well, which was my earlier plan,” the disappointed Head Coach added.

“Usually the rule is that the deciding games should be played at the same time on the same day, but the committee decided to give Renown the night match and us the day match and that is a bit of a disadvantage for us,” Karunarathne was skeptical about FFSL’s decision making.

Army on the other hand was delighted how they finished off the campaign thought regretted how an off-field mistake cost them the championship.

Renown SC has been awarded the win in their match against Army SC after the Competitions Committee found Army guilty of fielding an ineligible player in the 2016 DCL Super 8 Week 3 encounter.

“I think the decision regarding Asikur Rahuman, was a crucial 3 points we lost in the campaign. We had just 3 days to prepare for the next game against Colombo FC and the pressure really told. We had a great chance of winning the trophy, but at least today we showed everyone what we are capable of,” told Army SC Head Coach Mohamed Fawmy.

Army scored 13 goals and only conceded one in the three games after their win against Renown was reversed. They finished off 25 goals in seven matches at an average of 3.57 goals per game, showing off their dominance.