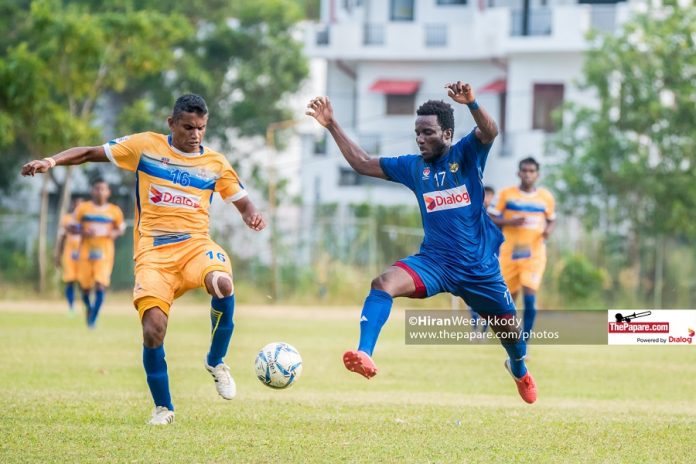 Defenders FC’s missed opportunities came back to haunt them as they drew 1-1 against Pelicans SC in their week 11 fixture, ruining their opportunity to at least temporarily move to the top of the Dialog Champions League 2018 table in the match played at the Kelaniya Football Complex.

The Defenders came into the game 2nd in the table, just a point behind leaders Blue Star SC with 25 points. Pelicans meanwhile were 12th with 10 points, just 3 points above the relegation zone.

The Soldiers created the first opportunity of the game when a long-range effort by Eranga Priyashantha went just wide of the target.

Asikoor Rahuman then tried to link-up with Niroshan Pathirane for Defenders with a good cross into the box. However despite Pathirane going on full stretch, he failed to make contact with the ball.

Defenders dominated possession as they played a passing game, while Pelicans played right into their hands sloppily giving away the ball whenever they won it back.

The chances kept coming for the Soldiers when around the 20th minute, Rahuman struck a powerfully low driven effort which went just wide of the post. That opportunity was followed by another when a good cross into the box by Madushan De Silva was headed towards goal by Suraj Bernard. However a good save by goalkeeper Mohamed Nafrees saw the chance denied.

As the half progressed, the tempo remained the same with Defenders continuing to dominate play and possession while Pelicans struggled to get out of their own house.

Inevitably with the run of play, the Soldiers finally broke the deadlock in the 44th minute. Bernard received the ball on the edge of the box and with a powerful finish, had Nafrees completely beaten.

Rahuman got Defenders off to a dominant start in the second half with a long-range effort struck powerfully towards goal. A stunning diving save by Nafrees however saw the effort saved at the expense of a corner.

It took till the 55th minute for Pelicans to get their first real chance of the game. The attack was started with a good over-the-top ball by Mohamed Infas, before it found Cobbinah Godfred inside the box. He took a number of touches before his shot on the turn flew just wide.

Minutes later Defenders won a free-kick on the edge of the opposition box. Madushan stepped up anf struck a beautiful curling effort that saw another brilliant save by Nafrees to deny the Soldiers.

In the 66th minute, Pelicans broke on the counter-attack and equalized against the run of play. A good through-ball found Godfred just outside the box before he dribbled past his man and took a strike from the edge of the 15-yard box. The shot beat Luthfi, giving Pelicans the goal with their first shot on target.

Pelicans after equalizing had quite a few chances of their own, but yet again it was Defenders who continued to dominate possession and play. However the lads from Kurunegala defended resiliently.

Pelicans’ Infas had a crack at goal from outside the box, but the effort flew just over the crossbar. The Soldiers had two efforts at the other end in the closing minutes, but Nafrees made good saves to end the game on level terms and put a road bump in Defenders chase of Blue Star for the top spot of the Dialog Champions League.