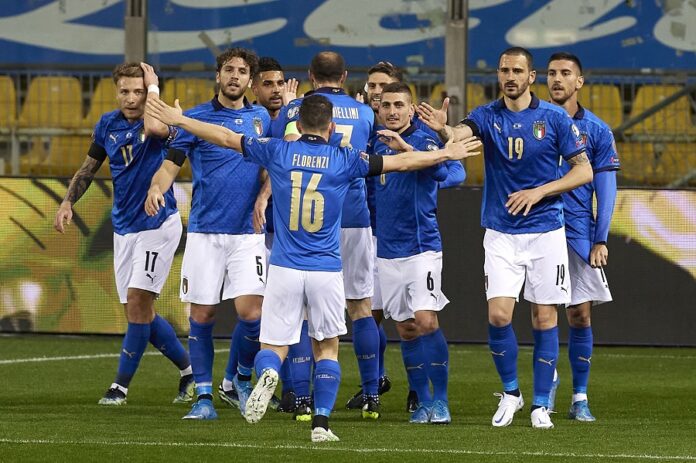 The dark horses Italy, whose only Euro championship was 53 years ago, will look to make a return to their glory days in Euro 2020 on the back of their famous defense.

Italy emerged Champions in the 1968 European Championship held on their home soil, which was also the inaugural Euro at which they were able to secure their qualification. Italy comfortably triumphed over Yugoslavia by 2-0 goals in the second final, after the first final between the two teams ended in a draw (1-1).

Thereafter, they were able to make it to the finals on two occasions in Euro 2000 and 2012, but fell short of winning the trophy after suffering defeats at the hands of France and Spain respectively.

After their elimination from Euro 2016 in the quarterfinal stage by Germany on penalties, and the departure of Antonio Conte as their Head Coach, the Azzurri underwent a period of lackluster performances under their new Coach Gian Piero Ventura. These saw them failing to qualify for the 2018 FIFA World Cup, marking their absence in a major international tournament for the first time since 1992.

However, the appointment of the seasoned campaigner Roberto Mancini as their new Head Coach in 2018 has changed Italy’s fortunes, generating a remarkable resurgence of their performances. Italy under Mancini has grown from strength to strength and is now once again a force to be reckoned with in world Football. They have not lost a single game since September 2018 and are currently on a 27-game unbeaten streak, in which they have recorded a whopping 75 goals and conceded only 7.

The Azzurri had an extremely thriving Euro Qualifiers campaign and were the only team beside Belgium to secure qualification with a perfect record, as they topped group J winning all 10 games quite comprehensively. They scored a mammoth 37 goals in the Qualifiers while conceding only 4.

Their top-notch form continued in the recently concluded international friendlies as well, where they eased past San Marino by 7-0 and Czech Republic by 4-0.

Roberto Mancini is known among the Football community as a tactical genius who opts for a possession-based style of play, making his players press opponents high up the pitch and defend deep to maintain clean sheets. He is also famous for transforming squads from scratch, experimenting with players to find the perfect combination of talent and balance and maintaining a consistent tactical approach, which is exactly what he has done so far with Italy.

Mancini has utilized a total of 70 different players during his tenure as the Head Coach of Italy, which includes the 40 different players that he used during their Euro qualification campaign, and it seems now that he has finally found the perfect blend that he was looking for in the team.

Mancini has mostly employed a 4-3-3 formation in line with his tactical approach and style of play, which is expected to continue during the upcoming Euro as well.

The Azzurri, which have been historically synonymous with an air-tight defence, continue to be a rock at the back owing to the prowess of stalwart centre-backs such as Captain Giorgio Chiellini and Leonardo Bonucci. The Chiellini-Bonucci duo, often referred to as one of the best centre-back combinations of the present-day Football, is as formidable as it gets and would prove to be a massive challenge for even the most powerful and creative front lines to break through.

Further, Mancini’s system has allowed the players to freely find the back of the net without overly relying on their frontline to score goals. The 37 goals they recorded during their qualification have come from 19 different players. They are also effective in set-pieces and good in the air, and hence pose a huge threat to opposition defenses.

They also have the home advantage during the group stage as all their group fixtures are scheduled to take place in their own backyard – Stadio Olimpico in Rome.

However, underwhelming performances of their frontline could become a huge threat to Italy moving onto the knockout stages of the tournament. Although Ciro Immobile, Lorenzo Insigne and Andrea Belotti have all had impressive performances for their respective Clubs, they have so far failed to replicate their success at the Club level with the Azzurri.

It was Belotti that led the way in Qualifiers, but with only 4 goals. Thus they would need one of their forwards to have their scoring shoes on throughout the competition to score those crucial goals that would turn the ties around in a split-second.

They are also not drawn in the easiest of groups, with Switzerland, Turkey and Wales all being capable of producing an upset on their day, and Italy would have to play their best Football right from the very onset to make it through to the knockouts.

The injury concerns of Italy’s midfield maestro Marco Verratti is also a worrying sign for the Azzurri with the tournament approaching, as he is an essential part of Mancini’s system to set the tempo of the game and orchestrate attacks through his accurate passing ability.

Ciro Immobile is coming off two exceptional seasons, with Lazio winning the European Golden Shoe with 36 goals in 2019-20 and recording another 20 goals in the following season. Although his performances in the national outfit have been lackluster, he would be a key player in Mancini’s plans and would be expected to lead their attack in the tournament.

Bonucci is another pivotal player of the squad not only in marshaling the defense, but also going forward, with his impressive passing ability racking up 3 assists during qualifiers. At the same time Jorginho, who had an astounding season with Chelsea winning the Champions League, would be essential to Mancini’s game plans in holding up the midfield.

The young midfield duo of Manuel Locatelli and Nicolo Barella would be the players to watch out for due to their immense potential in maintaining possession, attacking and playmaking in unlocking the opposition defences.