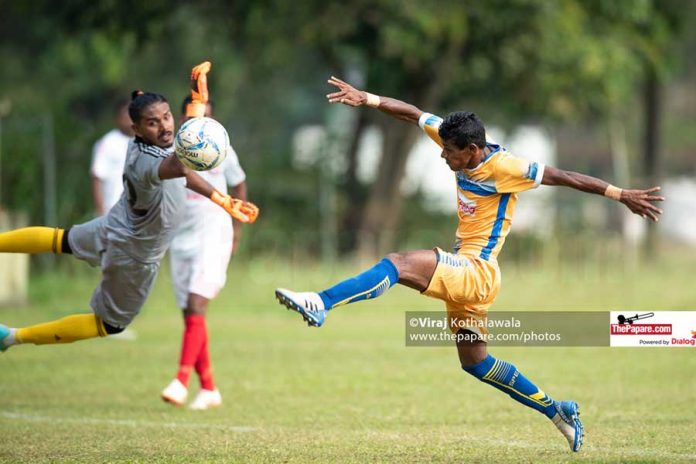 Defenders FC moved up to second place in the Dialog Champions League points table after beating New Youngs FC 2-1 in their week 09 encounter played at the Kelaniya Football Complex.

Defenders, 4th in the table with 19 points, came into this fixture with the chance to move into 2nd just a point behind leaders Blue Star SC if they secured a win. New Youngs meanwhile stood in 11th with 9 points.

The Soldiers got the first opportunity of the game when they broke into the opposition box and following some scrappy play, Niroshan Pathirane took an effort that was well saved by goalkeeper Danushka Rajapaksha.

Java Lane win it late against Negombo despite Sujeewa heroics

Defenders were handed another opportunity when the New Youngs defender scuffed his clearance, heading the ball straight into the path of Kasun Pradeep. Pradeep however skied his effort well over the crossbar.

New Youngs’ B.S. Nimo then showed good skill when he dribbled past a couple of defenders before taking a strike that was well saved by Mohamed Luthfi.

Defenders had majority of the possession and therefore created majority of the chances in the half. They tested goalkeeper Rajapaksha yet again when Pradeep broke through the New Youngs defence off a through-ball by Pathirane. Pradeep’s effort was well saved by Rajapaksha, but the rebound opportunity fell to Pathirane whose effort was cleared off the line by the defence.

Minutes later another chance arose for the Soldiers when a good cross by Kamaleswaran Kajanthan seemed to be intended for the head of Pradeep. The cross however nearly crept into the far corner before missing the upright by inches.

Defenders found the back of the net in the 28th minute, but their celebrations were cut short with the flag being raised for an offside infringement.

Pradeep struck a free-kick powerfully on goal from a dangerous area, but another good save by Rajapaksha saw the Soldiers denied yet again.

The Wennappuwa lads were continuously bolstered by their African attackers who ran their attack on a superior level to the rest of the team. Nimo yet again created a chance when he skilled his way past a couple of defenders before his final effort took a deflection, making it an easy save for Luthfi.

Defenders who continued to look the more likely of the two to score first, finally broke the deadlock in the 70th minute. A good through-ball found Asikoor Rahuman inside the box before he rolled his shot under the onrushing Rajapaksha to give the Soldiers the lead.

Rahuman got two openings to double his sides lead, Rajapaksha however on both occasions was up to the task pulling off good saves to keep his team in the game.

Rajapaksha’s goalkeeping heroics paid off when in the 81st minute, New Youngs pulled off the equalizer. Sloppy defending by the Soldiers allowed a cross to find Nimo, who smashed it past Luthifi into the back of the net.

The jubilation did not last long for New Youngs when 4 minutes later, Defenders were awarded a free-kick in a dangerous area. They capitalized on the set-piece crossing the ball to Suraj Bernard on the edge of the box, who with a stunning finish, had Rajapaksha completely beaten to restore their lead.