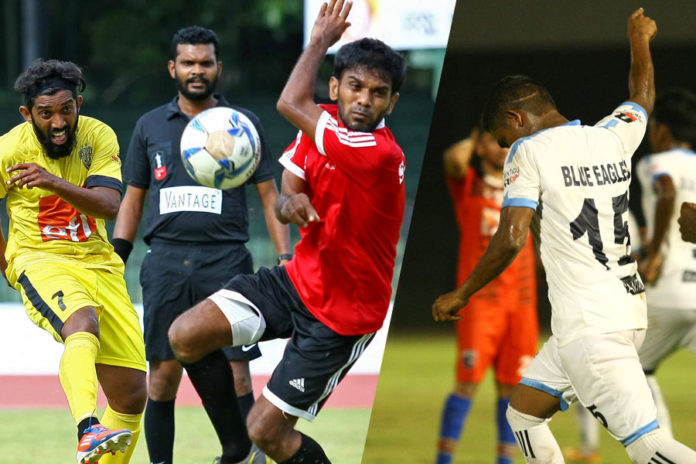 Colombo had to dig deep to earn three points while Blue Eagles narrowly defeated Crystal Palace in the group E encounters at the Sugathadasa Stadium in the FFSL President’s Cup 2020.

Second half goals saw Colombo FC defeat SLTB SC 3-0. Colombo FC were made to work hard for the win after a brilliant display of goalkeeping by Kalpana Sudesh.

In the first half the men in yellow had a number of chances, where they were either wasteful in-front of the goal or were denied by excellent saves from SLTB goalkeeper Sudesh. Momas Yapo & Mohamed Aakib were denied penalties by referee Mohamed Azard adding to their frustration.

Minutes into the 2nd half Momas Yapo opened the scoring with a powerful low effort from outside the box easing the nerves. Sudesh who got a hand to it could have done better. Within the next 20 minutes Colombo managed to add another two goals.

Mohamed Fazal finished off a slick move with Ahamed Shazny to score from an angle while Zarwan Johar curled in a delightful goal to make it three. His effort from just outside the box took a deflection off Fahim Nizamdeen’s face leaving Sudesh rooted to the spot.

Mistakes by Crystal Palace defense gifted both the goals as the match ended 2-1 in favour of Blue Eagles.

Kavindu Ishan opened the scoring for the Airmen when he came inbetween a fluffed clearance by a defender to poke home in the 16th minute. Mohamed Zaid equalized minutes before half time with a wonderful goal.

Neither team was at their best but Blue Eagles managed to come on top of the lads from Gampola on most occassions. On the hour mark Nethma Malshan restored Blue Eagles lead scoring another easy goal after Palace goalkeeper spilled a routine collection at his feet.

Blue Star has one hand on Championship