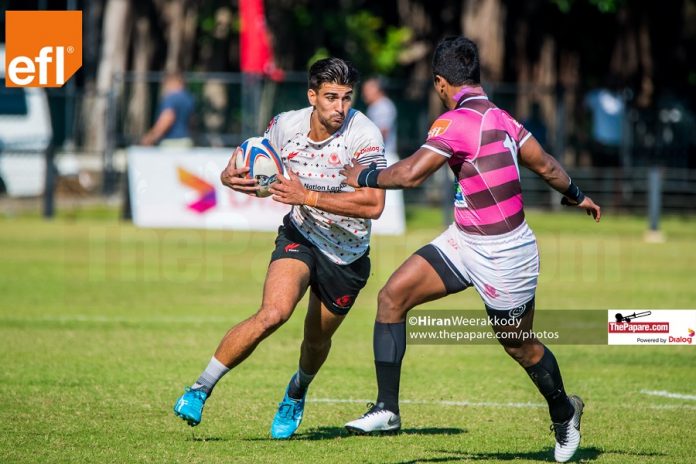 CH & FC continued with their winning streak as they humbled the title challenger Havelock Sports Club 40 points to 33 in an important fixture of the Dialog Rugby League played at Racecourse International Stadium.

Samuel Maduwantha kick started the big clash of week 12 of the Dialog Rugby League as CH looked to continue their winning streak. Maduwantha slotted in an early penalty through the uprights for the home team but Havies straight way replied through some quick thinking by magician Mithun Hapugoda as he took a quick tap and went past the CH defence and prop forward Dushamantha Priyadarshana powered himself over the line to score for the Park club. Riza Mubarak managed to put on the extras. (CH 03 – 07 HAVELOCKS)

Havies continued to attack the CH line while Sudam Sooriyaarachchi gave away an unwanted penalty in their own red zone as the Havies rolling maul got under way by going past the line when Azmir Fajudeen grounded the ball over the try line to score the second try for the Park club. (CH 03 – 12 HAVELOCKS)

Havies kept on attacking and CH didn’t have any possession of the ball as they kept on defending. The Pink shirts went over for the third try when Shawket Lahir went past the CH line with the help of his teammate Umesh Madushan to increase their lead. Mubarak kicked an easy conversion through the sticks.

CH had to hit back soon and so they did it through a powerful run by Hirantha Perera as he pushed away two Havies defenders to score a crucial try for CH while Maduwantha missed a rare conversion. CH got the momentum towards them as skipper Rohitha Rajapaksa went past the game line and silky hands from CH backs while Maduwantha managed to cutback in as Adam Gauder’s supporting run paid off as he scored under the post and Maduwantha this time slotted in the conversion. (CH 15 – 19 HAVELOCKS)

Havies yet again went back to their forwards as they patiently kept on playing few phases until Mithun Hapugoda sneaked in through the CH defence to score the bonus point try for the Park club. Mubarak converted an important kick from the corner to increase their lead.

Few phases later CH replied quickly though the speedy half back Sudam Sooriyaarachchi as he collected a lose ball from a 5 meter scrum and went over as the Havies defenders were caught napping just before the break.

CH carried on with their good work which they produced in the last few minutes of the first half as smooth hands and sublime supporting lines continued to flow as Havies struggled to keep up to the speed of the gymkhana club as Avishka Lee drew three Havies defenders and made a pop pass to leading point scorer for this season Samuel Maduwantha to score under the post to regain their lead while Maduwantha increased the lead through an easy conversion. (CH 29 – 26 HAVELOCKS)

Havies were given a life line as assistant referee spotted a high tackle and referee Wilkinson sent the try scorer Adam Guader for the bin for 10 minutes as Havies continued to attack with the numerical advantage. Mubarak spotted space in the corner and beautifully executed a cross kick which was collected by the winger Chamara Dabare and he scored an easy try to get the lead back as Havies took maximum advantage from the earlier yellow card. Riza Mubarak continued his good work as he bisected the sticks from a tight angle. (CH 29 – 33 HAVELOCKS)

Young kicking sensation Samuel Maduwantha managed cut the deficit to just one point through a perfectly nailed 45-meter kick for the home side as Havies were penalized for leaking unwanted penalties. (CH 32 – 33 HAVELOCKS)

Havies continued to be indisciplined in the breakdowns as CH used the wide channels regularly as their forward moved slowly towards the line and Sudam Sooriyaarachchi showed a dummy and sneaked in to score his second for the game. (CH 37 – 33 HAVELOCKS)

CH & FC managed put the icing on the cake through another excellent three-pointer from the youngster Samuel Maduwantha in the final move of the game as Havies suffered their second defeat for this season and opened up the Dialog Rugby League for the top three teams.