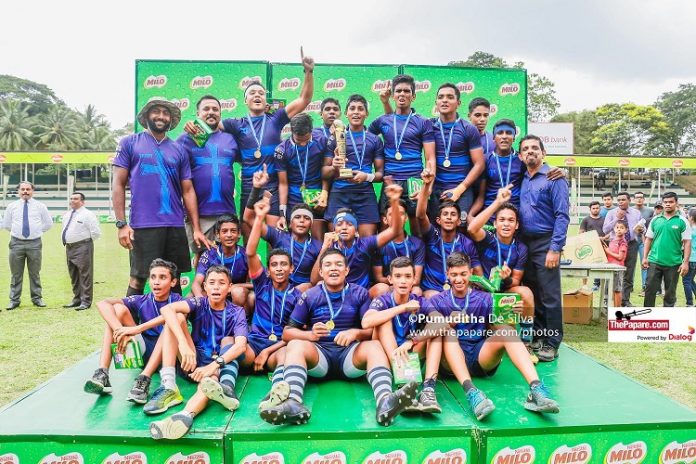 The Schools’ under 16 All-Island Ten’s tournament will take place this time on the 9th and 10th of August with the participation of the junior heavyweights in the schools’ rugby arena.

After the Schools League, the focus will now shift to the Hill capital stadiums of Pallekelle and Bogambara where the two-day tournament will be played with 4 groups battling in each stadium before the spotlight shifts to Bogambara on the 10th for the business end of the tournament.

Players born after 31st December 2004 will be eligible to participate and it will be an ideal opportunity for the juniors who are on the brink of making it to the big arena to bring out the best in them.

The All-Island competition organized by the Sri Lanka Schools’ Rugby Football Association will feature 32 schools, competing in 8 groups with the winner of each group qualifying to play in the Cup quarter finals. The losers of the Cup quarter finals will compete in the Plate semi-finals. This will also be a tournament in which the coaches get to have a look at the under 16 lads who will be potentials for the first XV jerseys in the years to come.

The Under 16 League tournament was introduced by the Sri Lanka Schools’ Rugby Football Association in a bid to improve the junior rugby system in the country. The initiative that kicked off a few years ago has had tremendous growth with ample schools enlisting themselves in the junior tournament. Played under normal World Rugby guidelines, the under 16’s will use the full ground as the playing area.

Defending champions of the Under 16 10’s All Island Schools’ Rugby Championship, Wesley College, will go in as favorites for this year’s tournament that starts this week with plenty of first xv players who are available and eligible to play strengthening the Wesleyites.

And also this time around Isipathana College willgo in as a contender eyeing the trophy, after not having tasted victory for sometime now. St. Joseph’s, St. Peter’s and Royal College are strong contenders as well finishing the friendlies of the season on a high played prior to the first xv matches this season.

Hence this year’s tournament is expected to be far more competitive than the previous year’s and much will be expected from the junior rugerites!

The Groups are as follows;


Stay logged on to ThePapare.com for updates and live coverage of the second day.