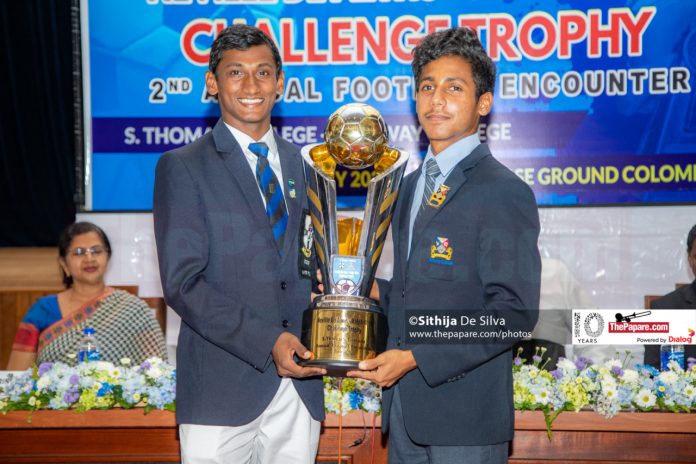 The second annual Football encounter between S. Thomas’ College, Mount Lavinia and Gateway College for the prestigious ‘Neville De Alwis – Ralph Alles Challenge Trophy’ will be played on the 25th of January 2019 at the Race Course Stadium, Colombo.

The media briefing announcing the encounter for the second consecutive year was held yesterday (11) at the College Hall of S. Thomas’ College, Mt. Lavinia with the participation of the Warden of S. Thomas’ College Rev. Marc Billimoria, the Chairman of the Gateway Group Dr. Harsha Alles, members of the staff and administration and players of the two teams.

The second edition of this encounter is scheduled to be played on the 25th of January at the Race Course Stadium, Colombo where the main event between the U20 teams of the two schools will be played under lights, kicking off at 6 pm. Shevan Ebenezer, who captained the S. Thomas’ College team last year as well, is bestowed with the rare honour of leading his team for the second year running while the experienced campaigner Areeb Niaz will be guiding the troops this year for the team from Gateway College.

The organizers have decided to include an U12 match to the encounter this year apart from the U14 and U16 matches that were played last year, which will be followed by a friendly girls’ game between the girls of Gateway College and the Overseas School of Colombo.

The ‘Neville De Alwis – Ralph Alles Challenge Trophy’; named in memory of two legendary and visionary educators and revered mentors to the present day, is a reminder of everything they stood for; camaraderie, sportsmanship and equal opportunity and is currently the only such encounter S. Thomas’ College plays annually with a reputed International School.

The inaugural annual encounter between the two U20 teams which was played last year at the new Football grounds of Gateway College, Ratmalana, saw the team from Gateway College emerge victorious as they wreaked havoc, demolishing the opposition by 5-1 with a brilliant display of Football.

However, the Warden of S. Thomas’ College Rev. Marc Billimoria, expressing his views at the media briefing said that he expects his boys to perform better this year with the time and effort they have put into the game this time around.

“It was pretty much a one sided affair last time. But it was an eye opener for the administration of S. Thomas’ College as Football back then was a sport that did not have much attention within our school. But we were able to improve things over the last year and now Football is the sport with the second most number of players turning up for practises, next to Cricket. The coaching staff and the players have been working extremely hard throughout the past few months preparing for this game. So I expect them to perform better this time and may the best team emerge victorious at the end of the day.”

The Chairman of the Gateway Group Dr. Harsha Alles expressing his views at the media briefing said;

“We faired pretty well last year. The game was played in extremely good spirit. I would be looking forward for players to repeat that. S. Thomas’ College, as we all know, is not used to such kind of defeats. So they have done well to revamp and grown up to become a strong side by now. So I’m sure that this would be an extremely competitive match between the two teams.”

S.Thomas’ College triumphed over Royal College, Colombo after several years in their Roy-Tho annual Football encounter last November and would be looking forward to avenging last year’s humiliation against the formidable Gateway outfit.

As things stand, the two teams are evenly matched with technically correct and skilful players who promise to provide spectators an interesting game filled with healthy rivalry.