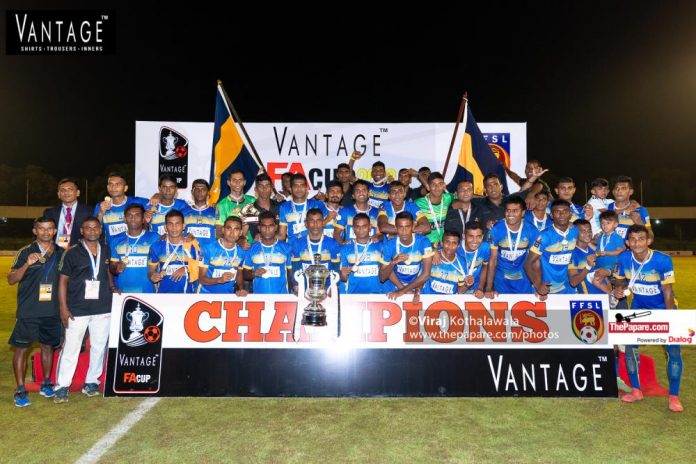 Mohamed Issadeen scored a brace to help SL Army SC win back to back FA Cups in a pulsating encounter denying Saunders SC a trophy on their Centenary year. The game which was played at Sugathadasa Stadium ended 4-2 in favor of SL Army.

Army SC and Saunders SC came up triumphant in their respective semi-finals….

The game kicked off amid great fan fare from both sets of supporters. It was a frantic start as expected and Sundaraj Niresh almost gave the perfect start to Saunders only to be denied by the upright in the first minute of the game when he took a 30 meter shot.

Army SC then got to the other end of the field and got an opportunity for them when Niroshan Pathirana got to the end of a cross in the far post only to be blocked by the defender for a corner.

Kasun Jayasuriya playing his final competitive match got into the game with a effort on goal in the 6th minute which Mohamed Luthfi saved easily.

Coming into 15 minutes both teams got into the game and tried to keep possession when the ball was with them. Army SC looked the more threatening towards goal as they kept pushing men up and repeatedly put Saunders midfield and defense under pressure.

All the pressure paid off when Jesuraj Bernard found the evergreen Mohamed Issadeen inside the box. The experience striker beating the defender calmly slotted to give the servicemen the lead in the 17th minute.

Asanka Viraj then pulled off a brilliant save to deny Niroshan Pathirana who was on after a delicious cross field pass from Madushan De Silva.

25th minute Indreewa Udara got the Saunders crowd to its feet with a long range effort which the Army keeper Luthfi saved with a dramatic dive.

In the 27th minute Mohamed Issadeen turned provider after a defensive mistake when he sent through a kick to Jesuraj Bernard.. He placed to near post to beat on the on rushing goalkeeper Asanka Viraj.

Roshan Appuhami then brought down Indreewa Udara inside the box and referee Robesh had no hesitation in pointing to the box. Sundaraj Niresh converted giving hope to Saunders in the 34th minute.

Just before the short whistle Jesuraj Bernard got the opportunity to give Army the 2 goal cushion just out side the 6 yard box but only managed to blast it over the cross bar.

Army kicked off proceedings in the second half. Both teams tried to win the midfield battle. It was Army once again who looked more threatening when Niroshan Pathirana worked his way into the box and got the cross in. The head back fell to Jesuraj Bernard who missed all to let Saunders off the hook.

Sajith Kumara then got into a horrible situation when he tangled with Sanoj Sameera and was in the referees book once again. The Referee rightfully showed the red card for a second booking.

Down to 10, Army still looked to control the pace of the game. Against the run of play in the 61st minute Indreewa Udara once again tried from long range and Luthfi once again made a brilliant finger tip save. In the resulting corner Sundaraj Niresh hit wide after finding him self with space and time.

Despite the numerical advantage Saunders were not able to penetrate the Army defense who used all their experience to thwart all possible attacks.

Kasun Pradeep then almost got end of a brilliant Army move once again courtesy of a Saunders error. Losing the ball in the midfield Udara gave possession to Issadeen and Madushan who combined on a fast break.

Sundaraj Niresh then hit the cross bar from a free kick 30 meters out. His second for the day hitting the wood rebound was cleared by Army defense much to their relief.

Saunders then were reduced to ten men when Priyadarshana brought down Issadeen on his way to goal. The resulting free kick by Asanka Viraj saved only to lay it on a plate to Issadeen who once again became the Man of the Final hitting the net.

Saunders fell into further misery when Sundaraj Niresh was shown a straight red for an elbow on an Army player in the 88th minute.

Saunders however got a goal in the dying minutes through Chamod Dilshan who slotted in from close range where Army failed to clear the danger from a free kick.

Army answered once again with a breakaway goal from Kasun Pradeep who ran around his man and sent in a cross only for the ball to come back to his feet. Stepping inside he smashed home to give Army the 6th title.