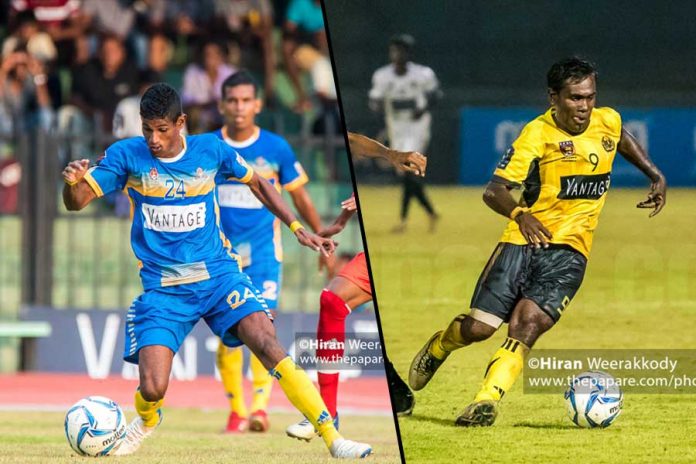 Army SC and Saunders SC came up triumphant in their respective semi-finals against Police SC and Colombo FC in the Vantage FA Cup 2018 played at the Sugathadasa Stadium.

The Vantage FA Cup 2018 has reached its final four stage, with the matches set…

The first semi-final was a clash of the service men which lived up to expectations as both teams showed grit and might throughout the 90 minutes.

Army kicked off proceedings and was immediately on the front foot with an attacking move. However, it was Police who got the first shot on goal in anger which went just over the crossbar.

From then on for major part of the game it was Police who kept asking questions from the Army defense and goalkeeper Mohamed Luthfi was kept busy with three consecutive corners. Mohamed Ruzaik almost scored the first goal in the 13th minute with a run from the right flank and the shot at goal went just wide beating the outstretched arms of Luthfi.

Both teams went at each other as the game switched from one end to the other. Both sets of forwards were given half chances which neither could capitalize on.

Army kept pressing and were rewarded near the half an hour mark courtesy of an own goal from the boot of Ishan Danusha Perera. Goalkeeper Mahendran Dinesh touched away a cross from the left flank only to hit the legs of the incoming Danusha which ended up in the empty net.

Police were full on attacking mode in the second half and Army looked to play slightly defensively. Asikur Rahuman and Bandara Warakagoda were strong in holding off Police attacks.

Police on the other hand brought in Shabeer Razooniya to strengthen the attack and were relentless in their attacks in search of the equalizer. Mid-way through the second half Razooniya found himself unmarked from a cross from the left flank and managed to head high and away to let Army off the hook.

In the 78th minute Razooniya once again got a golden opportunity to level for Police. From just outside the six-yard box with the goalkeeper Luthfi holding his ground he shot directly at him.

The second semifinal was another classic as two Colombo teams locked horns under floodlights. Saunders SC, celebrating 100 years were looking to restore lost pride in the FA Cup, kicked off the game.

Colombo FC were at their usual passing game as Mohamed Fazal, Zarwan Johar and Mohamed Aakib were fluent with their passing along with Mohamed Rifnaz in the midfield.

For Saunders, Indreewa Udara marshaled his troops from the midfield along with Chryshantha Abeysekara, Kasun Jayasuriya and Suntharaj Niresh providing the attacking threat. In the 15th minute Kasun Jayasuriya was denied by Kaveesh Fernando in goal for Colombo from 8 yards out with a brilliant save when it looked almost certain to end up in the back of the net.

Then it was Colombo FC’s turn when a free kick from Mohamed Rifnaz hit the wood work as the goalkeeper Asanka Vidanage was beaten all ends up.

Chryshantha Abeysekara went agonizingly close from a long-range effort minutes after as both teams were fluent in their buildup play only to be deprived of the end product. In the 36th minute Zarwan Johar did brilliantly to chest down a long ball just inside the six-yard box only to flash it high and wide across goal.

At the start of the second half Jayasuriya found himself unmarked with a cross from the left flank by Chamod Dilshan only to head it straight at Kaveesh Fernando.

Saunders, the better team in the second half, created several chances whereas Colombo FC tried to make their own build up play from the back.

In the 70th minute Jayasuriya using all his experience drew a foul from Nipuna Chintaka, inside the box, when the defender was caught wrong sided off a long ball from midfield. Suntharaj Niresh calmly slotted the penalty in to give the Price Park boys the lead.

From then on Colombo FC kept on peppering the Saunders goal to no avail as their finishing lacked precision and composure needed in front of goal.

As Colombo FC chased the game gaps opened up at the back, giving running space to Jayasuriya who hit the nail in the Colombo coffin with a typical Kasun Jayasuriya goal. A dispossessed ball from midfield was collected and he made a run to the box beating the on-rushing defender Rawme Mohideen and scored past Kaveesh Fernando to the far post.