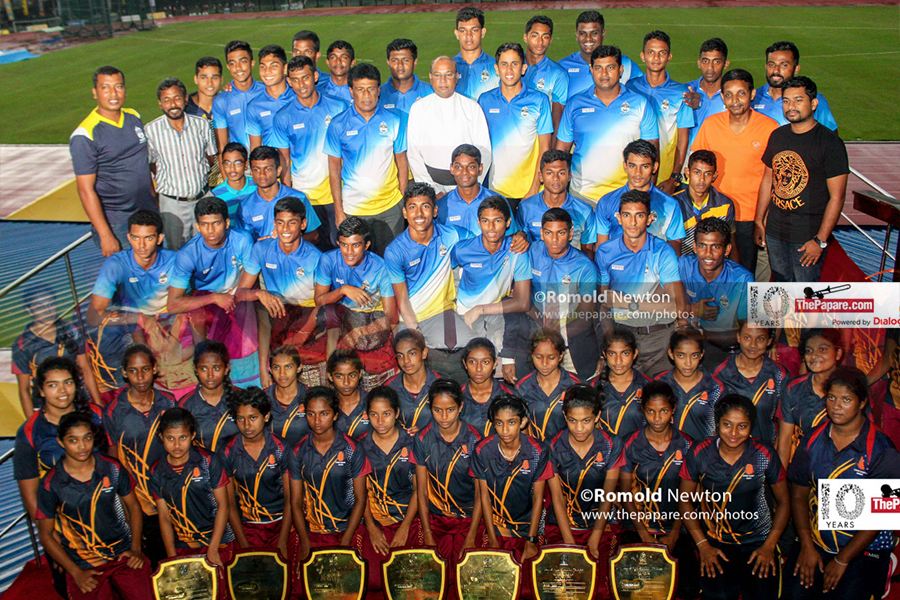 St. Peter’s College were once again crowned the overall Boys’ Champions while Walala A Rathnayake College won the much deserved Girls’ Champions trophy at the All Island Schools Athletics Championship which concluded on Sunday (3rd November) after five days of exciting competition.

The girls of Walala A. Rathnayake also went onto win the Girls’ Under 18, Girls’ under 20, the Girls’ Relay Championship, Mixed Schools championship trophy and the Senior Girls’ Trophy presented for 2019.

While Walala and the Peterites rejoiced, six individual awards were presented to the outstanding performers on show this year.

The award for Best Hurdler went to Navodya Sankalpa of Mahinda College, Galle for his dash of 52.50sec in the Boys’ Under 20 110m Hurdles event.

T G M Sandanuwa of Rajanganaya Maha Vidyalaya successfully achieved a 15.32m jump in the Boys’ under 20 Triple Jump event to walk away with the award for Best Jumper.

Rumesh Tharanga’s throw traveled 66.63m in the Boys’ Under 18 Javelin throw event to clinch the Best Thrower award of 2019.

Ravindu Bandara and his exceptional run in the Boys’ Under 18 400m event with a timing of 47.53sec won double merriments, the Best Runner award as well as the Best Male athlete award which came with a cash prize of 100,000/-.

The Best Female Athlete award was rightfully won by Shelinda Jansen of Gateway College, Colombo for her performance in the Girls’ Under 20 200m which she finished in 24.48sec. Her Gold medal in the Girls’ 100m and the 4x100m Relay played a valuable supporting role on her achievement.

While St. Peter’s College walked away with the Overall title, Royal College Colombo had the last laugh, being crowned the Best Performing School for the year 2019. St. Peter’s won the Runner-up award while Visakha Vidyalaya won third place.

>>Final Results & Records of the All Island Schools Games 2019<<

Apart from the main awards, a few honourable mentions are due at this year’s meet.

Shelinda’s understudy Sadeepa Henderson, mirrored her winning streak in the Girls’ Under 18 100m, 200m and the Long Jump in the Ritzbury John Tarbat Athletics Meet and the Junior Nationals this year. Her 200m performance of 24.88sec also renewed the meet record in the event.

Sithum Jayasundara, the young stallion from Sir John Kothalawala College had yet another successive streak of four Gold medals in the 100m, 200m, 400m, 4x400m, establishing 3 records on the way (except for 100m).

A name that should not be forgotten, Tharushi Karunarathne of Walala A. Rathnayake College, once again mesmerized the Sugathadasa Stadium with four Golds and four new meet records in the long distance running game. She won the 400m and the 800m while was a vital cog in the 4x100m and the 4x400m relays to achieve this incredible feat.