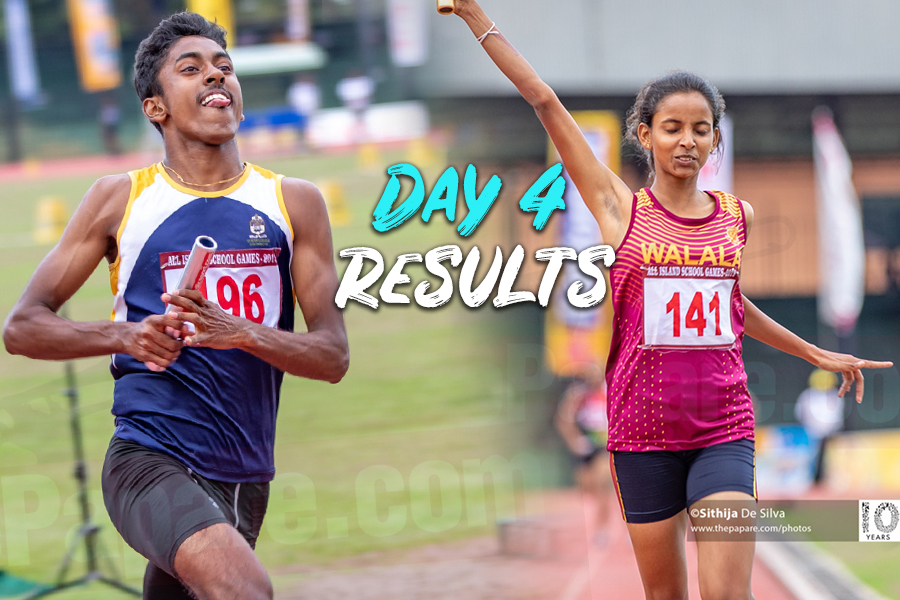 With one more day to go at this year’s All Island Schools Athletics Championship, the young boys and girls tore up the track with ten more records to add to the already long list on the fourth day of the meet concluded today, 2nd November at the Sugathadasa Stadium.

While most of the short distance running events had already been concluded, the Boys’ and Girls’ 800m events took the track in all age groups. The Boys’ under 18 and the Girls’ under 16 events saw its records being renewed by Ranabima Royal College and Walala A. Rathnayake College respectively.

T G Tennakoon of the Peradeniya Ranabima Royal College clocked in an impressive 1:52.06min to clinch first place with a record to his name. Tharushi Karunarathne, an up and coming superstar of the long-distance running field, shone with a record in the Girls’ Under 16 event with a time of 2:14.27min.

T D Rajanayake of Sagalapura KV and Shewan Abeysinghe of Lyceum International School Nugegoda tied for the Boys’ Under 12 60m Record with a time of 8.43sec at the finish line. Meanwhile in the Girls’ event, Ravidi Wenurika from Wijayapura KV Thanamalwila, claimed the under 12 record with a dash of 8.59sec.

The only other record today from the girls came from C Theepika of Mahajana College in the Girls’ Under 18 Pole Vault event. She cleared the 3.25m mark to win Gold.

Naveen Vishwajith Marasinghe and Pasindu Malshan of St. Joseph’s College did their school proud by claiming records in the Boys’ Under 16 Shot Put and Triple jump events, respectively. Vishwajith threw a distance of 16.20m to claim Gold while Malshan leaped 14.87m in the Triple.

St. Peter’s College also didn’t go home empty handed as the Boys’ Under 18 Discuss throw record was shattered by Rumesh Tharanga. He threw a distance of 50.30m to claim his reward.

>>Click here for full records and results of Day 4<<

One record from the 300m Hurdles event was seen from O V Ariyawansha of St. Aloysius College Ratnapura. He claimed Gold in the Boys’ Under 16 category, along with his record, with a run of 38.52sec.

St. Peter’s College remains on top of the Boys’ Overall Championship leaderboard with a comfortable lead, with 111 points. St Mary’s College, Chilaw trails far behind with 56 points while Walala Boys will look to catch up to second with 55 points to their names at the moment.

The Girls’ teams of Walala A. Rathnayake did well to hold on to the top spot in the Girls Overall standings with a whopping 179 points. Sumana Balika College Ratnapura and Gateway College Rajagiriya trail in second and third with 65 and 54 points respectively.

Will the top dogs be able to hold on to their lead with just one more day of competition left?

The final day of the All Island Schools Athletics Championship will come alive tomorrow, 3rd November at the Sugathadasa Stadium. Keep it logged for photos and videos from the meet!