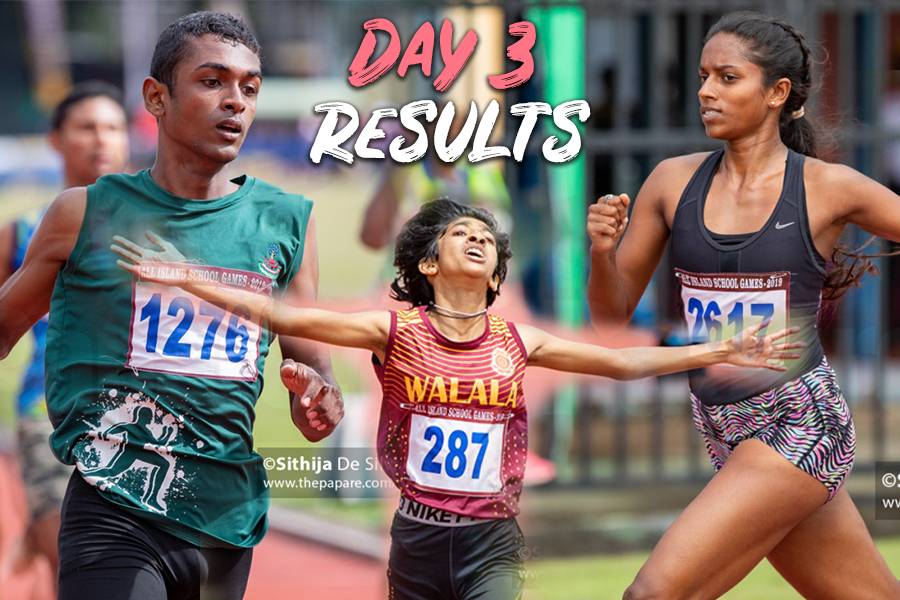 The third day of the All Island Schools Athletics Championship ended with fourteen records in both the Girls and Boys categories. The tournament is held at the Sugathadasa Stadium with the final day scheduled for the 3rd November, Sunday.

In the running events, the most anticipated 200m and the 4x100m and 4x400m were held this evening. That and the 100m and 110m Hurdles complimented an actiona packed evening at the Sugathadasa Grounds.

Representing St. Benedict’s College, young Anjelo Vidusha won the 80m Hurdles event with a time of 11.64sec which also qualified to establish a new meet record in the event.

Sithum Jayasundara of Sir John Kothalawala Maha Vidyalaya, Kurunegala won the Boys U16 200m event with a time of 22.16sec which was sufficient for the new record. In the Boys U18 age group, Milinda Perera of St. Mary’s Boys School Chilaw renewed the record with a run of 21.83sec.

Junior sensation, Sadeepa Henderson of Gateway College won Gold in the Girls U18 200m event with a record breaking run of 24.88 seconds. This is her second Gold medal at this years’ Games, winning the 100m event on the opening day.

Royalist Nadun Bandara broke the record in the 110m Hurdles event with a final timing of 13.80 seconds. The Girls Under 16 100m event also saw its record being shattered by S D Kahanagama of Sumana Balika Vidyalaya who clocked in 14.81sec to finish second and Senuri Anuththara of Dharmapala Vidyalaya with a time of 14.55sec to grab Gold.

St. Peter’s College Colombo won the Boys Under 18 4x100m Relay with a final time of 42.15sec which was enough to renew the standing record.

The 4x400m Under 16 Boys and Girls categories saw each of their records renewed by Sir John Kothalawala Vidyalaya and Walala A. Rathnayake M.M.V respectively. The Sithum Jayasundara led side finished with a time of 3:27.57min to clinch the Boys title while the Girls clocked in at 3:56.77min.

The final Girls record was renewed by Heshani Maheshika of St. Sebasthian Vidyalaya, Kandana in the Girls U18 Discuss Throw. Her throw of 37.55m was enough to go one step further than Gold and etch her name in the record books.

The Boys Under 12 Long Jump record was shaken by B A N Minsara of Marapola Maha Vidyalaya in Minuwangoda with. A leap of 5.18m. The final record in the Boys categories came from Ara Aiman from Batticaloa in the Boys Under 14 Shot Put event with a throw of 15.03m.

The All Island Schools Athletics Championship will see the 800m Finals on the 4th day of the event (2nd November) on the track, while more field events are set to take center stage throughout out the day.

Keep it logged onto ThePapare.com for photos, videos and results of the ongoing tournament!

>>Click here for Final records and Results of Day 3<<