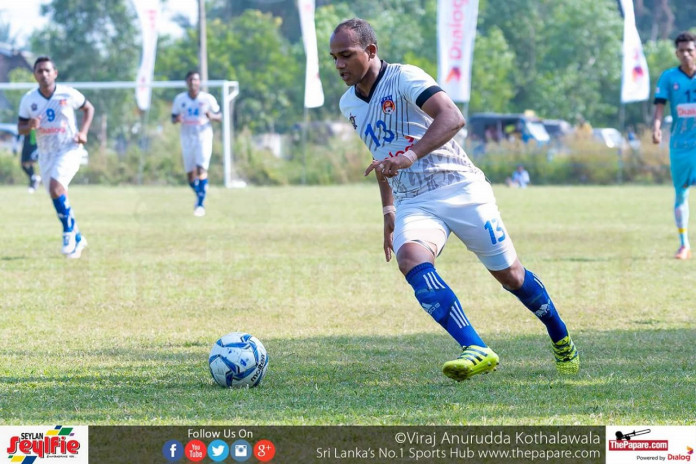 Air Force SC picked up their first win of the Dialog Champions League Super 8 stage at the Kelaniya Football Complex courtesy of forfeiture as the injury plagued Solid SC team started the game with just 7 players on the pitch.

The game was very much one way traffic in the first half, almost an attack vs defense drill at times as the entire Air Force team seemed to be camped in the opposition final third as the Solid team defended for dear life.

The Airmen seemed to be uncertain how to approach the game during the early stages as the Solid team defended well with goalkeeper Mohammed Ishan making a string of good saves at the start.

The Air Force team had several efforts go over the bar as well with Shanaka Udesh, Chathuranga Fernando and Kelum Perera all missing the target on several occasions.

The breakthrough finally came through in the 21st minute when Dilshan Fernando toe poked the ball home from the edge of the box to give Air Force the lead. Dilshan went close to a second as a thundering shot from range cannoned off the crossbar with the goalkeeper left stranded.

The second goal came six minutes later as Nipuna Bandara tucked home under Ishan after a deflected through ball found its way to him inside the box.

The game came to a premature end in the 32nd minute as Solid midfielder Tharindu Liyanage picked up an injury and could not continue, leaving Solid with just 5 outfield players.

Referee Prashanth Rajkrishna rightly then awarded the forfeiture to Air Force, giving them their first win over the Super 8 stage.

Speaking to ThePapare.com Nipuna Bandara skipper of the Air Force team had this to say;

“Situations like these come about because of the long drawn out nature of the tournament and this is unfortunate. Our team had a good tour of Pakistan, we drew a game and lost two by narrow margins but it was a great learning experience for the team. Hoping to end the season on a high against New Youngs.