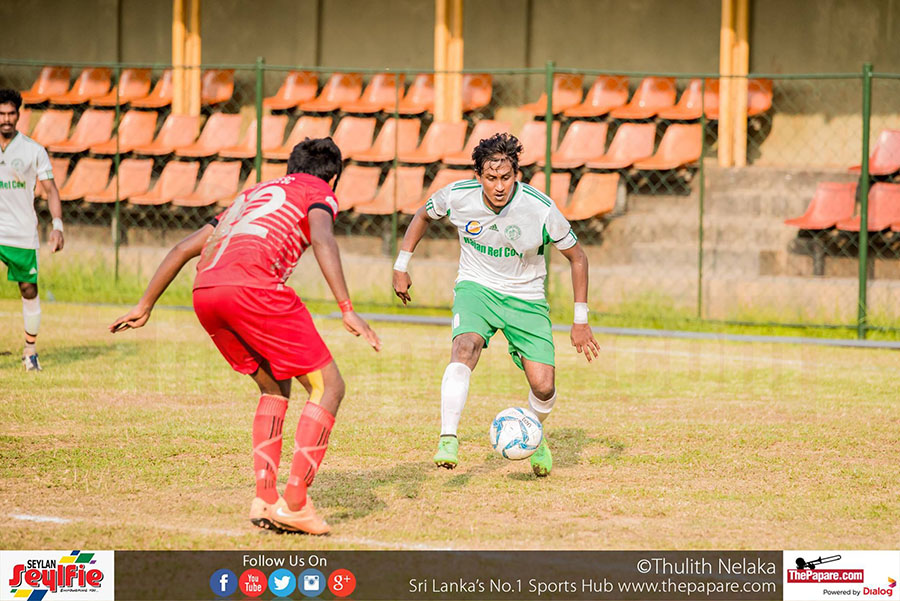 Java Lane SC set up a mouthwatering quarter final clash against cross town rivals Renown SC after they beat Crystal Palace FC 2-0 in their Round of 16 FA Cup clash at the City Football Complex.


Crystal Palace was on a high after defeating Champions League Super 8 side New Youngs FC on penalties while Java Lane thumped Kirulapone United in a bruising encounter.

Crystal Palace despite missing a couple of big names in Khalid Azmil and Mohamed Shifan got off to the brighter start, moving the ball around nicely with some quick sharp passing. Mohamed Shimaq had the first real effort on goal when his header off a free kick looped over keeper Dammika Senarath, but also over the crossbar.

Mohamed Rawzan had the next significant effort of the game, but his volley from 25 yards out was gathered rather comfortably by Senarath in the Java Lane goal. Crystal Palace defensively were top notch during the early exchanges denying the dangerous Mohamed Rizkhan and Naveen Jude any time on the ball to influence the game.

Java Lane slowly worked their way into the game as Malaka Perera headed Java Lane’s first chance of the game wide off the near post after latching on to a quality free kick from Rizkhan. He didn’t miss their second chance though, as a brilliant cross from Jude found him unmarked at the far post and the forward hammered the ball past the isolated keeper to give Java Lane the advantage.

Naveen Jude then squandered a glorious chance to double their advantage just before the break but failed to make clean contact on the cross, allowing the Crystal Palace keeper to gather ball.

Java Lane started the second half brightly as Malaka Perera found himself in the thick of it yet again, forcing a great save from Mohamed Akram in the Palace goal courtesy of a firmly struck header.

Java Lane scented a second goal was on the cards as Crystal Palace were left barely hanging on at times, riding out wave after wave of Java Lane attacks as Muneer Sally and then Naveen Jude both missed headers to double the lead.

Mohamed Shabeer eventually did get the goal Java Lane deserved heading home a deflected cross with the keeper left stranded by the deflection. Crystal Palace despite passing the ball into some good positions were very shy when it came to taking shots, which let Java Lane off the hook on a couple of occasions.

Janaka Chaminda failed to convert a glorious chance at the other end failing to steer the ball into a virtually empty net after being set up by Shabeer. Midfielder Chaminda’s hard working physical style of play causing plenty of problems for the Crystal Palace team.

Malaka Perera was then set up by a combination of Rizkhan and Chaminda, but he too could only blast a brilliant chance over the bar.

Substitute Mohamed Aleem was the next to miss, failing to make proper contact from point blank range as Crystal Palace continued to ride their luck. The misses would count for little though as Java Lane successfully held on for the remainder of the second half to seal progression to the quarter finals.

“We were desperate for the win and it was made easier as we have been playing well in the recent past. We missed a lot of chances; otherwise we could have scored 6-7. Need to look at it in training. It will be a tough match against renown. We will prepare well.”

“I am pleased the way we played because we missed four of our key players. We played with a very young and inexperienced side. Also playing away from home is huge thing. We missed chances in the first half. If we had scored them the match would have favoured us. Java Lane too played well in the 2nd half. Next target is the 2017 Champions League.”