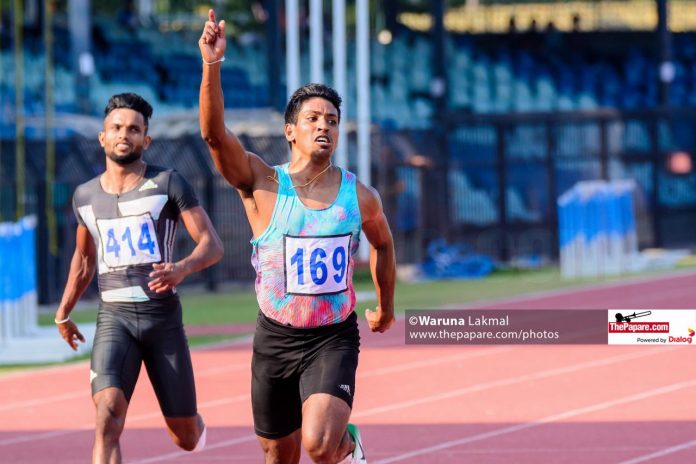 The final senior national trial which will work as a qualifier for the Asian Athletic Championship scheduled to be held from the 21st to 24th of April in Doha Qatar, will be worked out as a one-day trial with only shortlisted athletes allowed to compete in selected events.

Selection standard announced by the Athletic Association of Sri Lanka

The Athletic Association of Sri Lanka (AASL) has picked 16 Men’s and 14 women’s events which they think have shown potential in achieving good results at the 23rd Asian Athletic Championship which will be held in Doha. 352 athletes have been shortlisted for the second trial on the back of their performances in the first trial which was held on the 22nd and 24th of February.

The sprinters were impressive in the first National trial with terrific efforts coming in the 100m dash by Himasha Eshan and Vinoj Suranjaya who went neck and neck during the heats of the event, dishing out some head turning performances. Himasha recorded the best time run by a Sri Lankan athlete in the men’s 100m, clocking a +3.1-wind assisted 10.11secs. This was a welcome back performance by Himasha who couldn’t muster a great run last season. He went onto deliver another brilliant run in the semifinal of the event clocking 10.12secs with the wind gauge reading +2.6. Despite the impressive runs, Himasha’s timings were not be considered for the records as the wind reading was above the legal limits on both occasions. Vinoj was not far behind as he delivered a superb run of his own and equaled his personal best time of 10.27secs. Vinoj’s time of 10.27secs was previously recorded in Malaysia and is considered a joint national record by some scholars alongside Himasha Eshan’s run of 10.26secs, clocked in India where the officials failed to rectify the wind gauge reading.

Read – National record for Greshan as sprinters turn up the heat

Himasha put all the doubters to bed at the final of the Men’s 100m as he smashed the national record of the event and with it the South Asian record as well clocking 10.22secs to win the trial. Vinoj had a terrible start to the race where he seemed to slip and lose his footing straight out of the starting blocks but came back in the latter part of the race to finish second. If Vinoj had a better start, the time could have been further bettered and an captivating battle would have ensued between the two sprinters. Both of them would be determined to stamp their authority as Sri Lanka’s premier sprinter at the 2nd trial.

Sri Lanka has won 52 medals consisting of 19 Gold 14 Silver and 19 Bronze throughout the 22 concluded editions of the Asian Athletic Championship. At the most recent championship which was held in Odisha, India in 2017, Sri Lanka won 5 medals consisting of 1 Gold and 4 Silver medals. Sri Lanka’s only gold came through Nimali Liyanarachchi in women’s 800m. Gayanthika Abeyrathne was placed second in the same event securing Silver while Rumeshika Ratnayake (200m), Dilhani Lekamge (Javelin throw) and the Men’s 4X400m relay team all secured Silver.