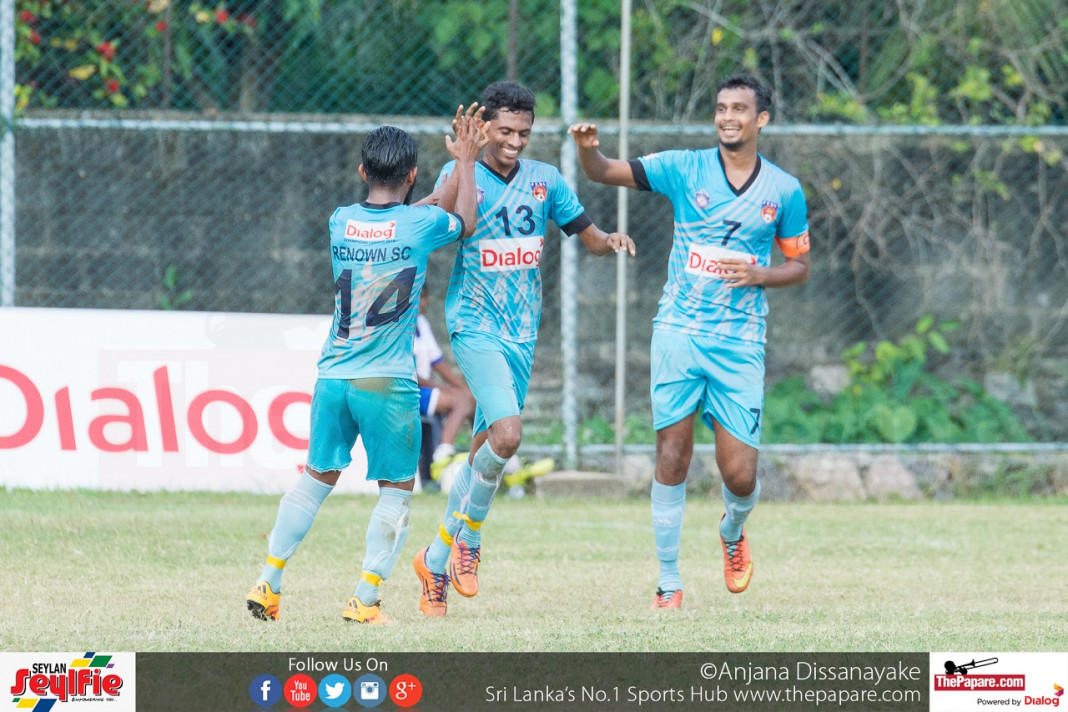 Renown SC scored three unanswered goals in the 2nd half to win 4-1 against Cooray SC and with it book a semi-final spot in the City FL President Cup at the City Football Complex.

Cooray SC were handsomely beaten 6-0 by Java Lane SC the week prior while Renown who had a shock 3-2 loss against Java Lane meant that both sides had to win to make it to the semi-finals.

It was cagey affair with both sides struggling to get a grip of the match especially for Renown SC whose passing game was hampered by the poor ground conditions at the City Football Complex.

However Renown was the first to score with Job Michael scoring in the 19th minute but Iroshan Grero equalized for Cooray SC in the 34th minute as both sides went into half time deadlocked at 1-1.

After Nilanka Jayaweera’s long range effort was acrobatically flapped away for a corner by Mohamed Uzman early in the 2nd half it was Renown SC who dominated proceedings.

Renown continued to make a few tactical moves but their dominance never lacked as their passing game finally clicked in the 2nd half to create chance after chance.

Renown’s new man Tharindu Lakmal beat two defenders on the right and his cut-back across the goal found Michael to tap in from close range in the 50th minute.

Lakmal continued to torment the defenders as he combined with Dimuthu Priyadarshana, whose cross was met by a Job Michaal volley which bounced off the far post and into the goal to make it 3-1.

Cooray SC goalkeeper Sudesh Suranga produced an outstanding double save off a Hakeem Kamil powerful shot and a rebound volley from Mohamed Sajid at the far post.

Jayaweera missed two chances shooting straight at the goalkeeper and the other away from goal as Cooray looked out of sorts at the attacking end.

Priyadarshana and Lakmal missed a couple of chances but deep into injury time Mohamed Rizni was at the end of a wonderful flowing move, to round off the goalkeeper to score the 4th.

Players yearning for a National call-up