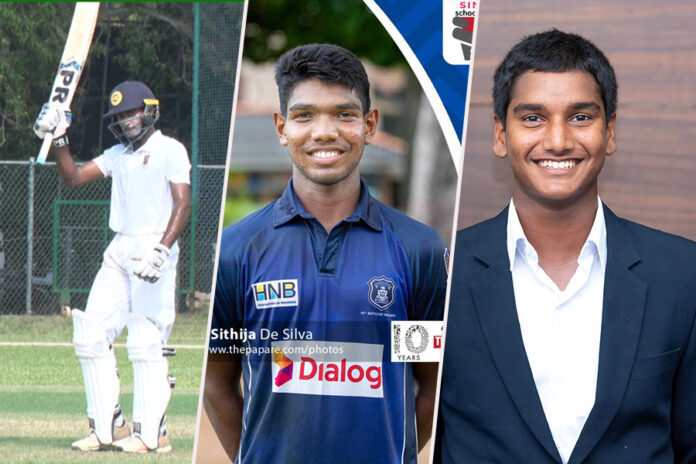 Royal College and St. Joseph’s College qualified for the Final of U19 Schools Tier A Limited Over Cricket Tournament as they defeated Mahanama College and Trinity College respectively in the Semi-Final encounters worked off today (28th April) at Moratuwa and Maggona. Meanwhile, the traditional encounter between St. Anthony’s College and St. Sylvester’s College ended in a draw today at Kandy.

After been put in to bat first, Mahanama College got off to a shaky start losing 3 wickets for 48 runs in the first 18 overs. However, the in-form batsman Pavan Rathnayake and Vinuka Rubasinghe rebuilt the innings adding a solid partnership of 92 runs off 145 balls for the fifth wicket.

However, there was no significant contribution from the lower order batsmen as Mahanama finished their innings on 209 for 8 in the allotted 50 overs. Rathnayake top-scored with a knock of 114 runs off 150 balls with 3 fours and 4 sixes. The right-arm seamer Sonal Amarasekara was the pick of the bowlers for Royal as he bagged 3 scalps for 29 runs.

Chasing a modest target of 210 to win, Royal College lost two quick wickets for 28 runs in 7.2 overs but the opener Sehan Herath and number four batsman Sadisha Rajapaksha rebuilt the innings with a 116-run partnership for the third wicket. Royal College got over the line in the 47th over losing only 4 wickets.

Rajapaksha top-scored with an unbeaten knock of 85 runs off 129 balls with 3 fours while Herath contributed with 62 runs off 95 balls with 2 fours and a six.

Read : Devapathiraja and Mahinda to clash in Final

Having won the toss, Trinity opted to bat first but things didn’t go their way as planned, they were restricted for 160 runs in 49.4 overs. Pawan Pathiraja was the chief contributor with the bat for Trinity as he made 61 runs off 117 balls with 5 fours. Mithira Thenura and Dunith Wellalage impressed with the ball for Joes taking 3 scalps each.

It was an easy target for St. Joseph’s College as they cruised to the victory without losing a single wicket. The opening batsman Sheran Fonseka was the dominating force with the bat for Joes as he scored unbeaten 93 runs off 116 balls with 10 fours while Sadeesh Jayawardana played the second fiddle for him scoring unbeaten 62 runs off 98 balls with 5 fours to his name.

After putting up a solid score of 385 on the board, St. Sylvester’s College managed to restrict the opposition for a low score of 62 in their first innings. Divyesh Ramaiya had a great outing with the ball as he picked up 5 wickets for 22 runs. The seaming all-rounder Chamindu Wickramasinghe gave him good support at the other end picking up 3 wickets.

With a mammoth lead of 323 on the board, Antonians began their second innings and batted with some aggression as they posted 164 for 7 in 28 overs setting a massive target of 488 for the opposition.

St/ Sylvester’s batsmen managed to draw the game as they finished day two on 113 for 7 in 27 overs. Gihan Ebert and Divyesh Ramaiya were impressive with ball for Antonians as they shared 5 wickets among them.

Read Also : 121st Southern Battle of the Blues ends in a draw