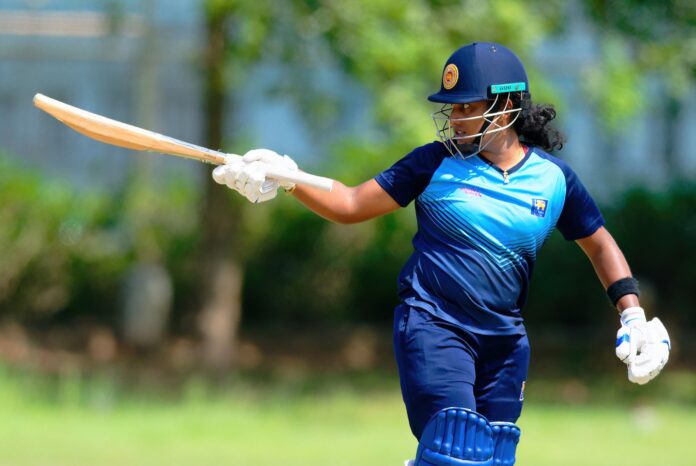 Chamari Athapaththu got her SLC Blues side over the line against the Greens, while Prasadini Weerakkody and Nilakshi de Silva starred to extend the Reds’ unbeaten streak on Day 3 of the SLC Women’s Super 4s T20 tournament.

The 1st game of the day saw the finalists from the 50-over competition clash and yet again, it was the Reds who came out on top. After opting to bat, they amassed the highest total of the competition so far, 123/2, off their 20 overs, with veteran wicket-keeper batter Prasadini Weerakkody top-scoring with a brilliant, unbeaten 49-ball 60.

It was the 87-run partnership between Weerakkody and skipper Nilakshi de Silva that took the Reds across the 120-run mark, with Nethmi Senarathna and Manudi Nanayakkara being dismissed cheaply.

The Grays’ batters Vishmi Gunaratne and Hansima Karunaratne fought hard but just could not lift the run-rate high enough to get to the target.

The second game of the day was a rain-interrupted affair, that saw it being reduced to 5 overs aside. The Greens went hard but could only manage 46, with Inoka Ranaweera picking up 2/20. Athapaththu, who missed the 50-over competition as she was away at the WBBL, has looked in form throughout the competition and finally managed to get a match-winning knock under her belt, smashing 34 off 16, including 1 four and 3 sixes to get the Blues across the line with 2 balls to spare.