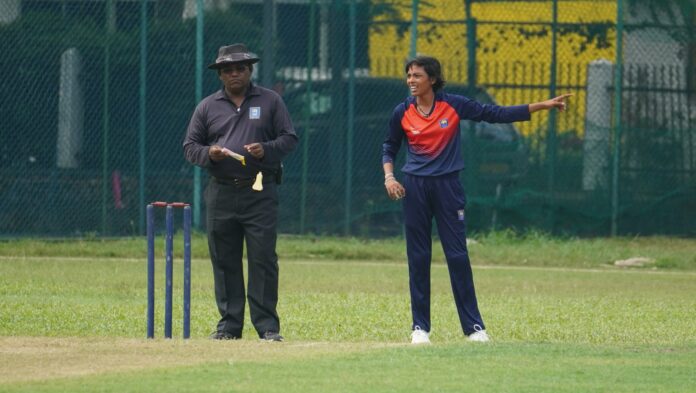 The Reds, champions of the 50-over version of the tournament, took on the SLC Greens in the first game of the tournament at the BRC Grounds in Colombo. The Greens opted to bat first but were completely blown away by the Reds’ attack as they finished with just 89 runs in their 20 overs.

Hasini Perera top scored for the Greens with 42 but it was the Reds’ left-arm quick Tharika Sewwandi who stole the show with a brilliant 3/13 in her 4 overs. She was well supported by the rest of the Reds’ bowling attack as the Greens found runs hard to come by; none of the batters apart from Perera got to double figures.

The Reds lost regular wickets but 89 was never going to be defendable and they got home with 6 wickets and 1.3 overs to spare in the end. Skipper Nilakshi de Silva top-scored with 27 off 29.

The 2nd game of the day was stopped short due to rain with the Grays needing 59 off 58 deliveries against the Blues.

Chamari Athapaththu, who has returned to Sri Lanka following the WBBL, looked in good touch as she smashed 49 off 28 for the Blues, giving them the perfect platform to launch. However, after her dismissal, the Grays pulled things back with off-spinner Tharushi Rajakaruna picking up 4 wickets for 19. The Blues ended with 109 off their 20 overs with Lihini Apsara (28) the only other batter apart from Athapaththu to make it to double figures.

The Grays started well, with skipper Harshitha Samarawickrama and Imalka Mendis put on 31 for the 1st wicket. Mendis fell and the rains came down soon after, leaving the Grays on 51/1 in 10.2 overs.