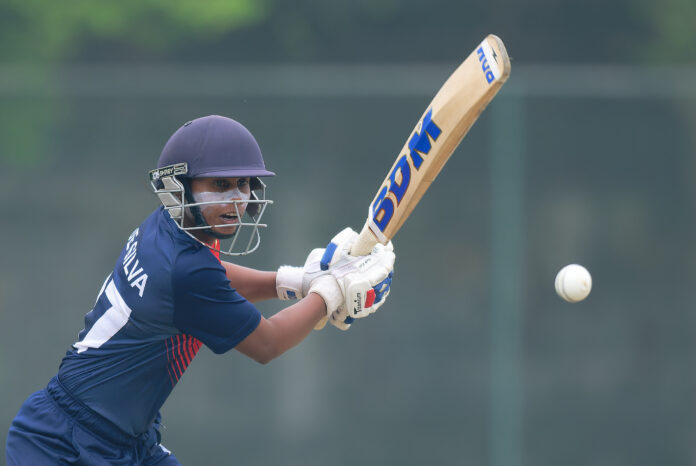 On the 5th matchday of the SLC Women’s Super Four T20 tournament, SLC Reds overcame SLC Blues to clinch their 4th win of the tournament. Blues who have played 5 games in the tournament so far are the only unbeaten side with 4 wins and 1 no result.

Blues skipper Chamari Athapaththu who won the toss decided to field first at the Colts Ground. Reds who lost two quick wickets to begin their innings recovered exceptionally well when Nilakshi Silva the skipper and Prasadani Weerakkody combined to construct an 81-run partnership. Silva who continued his fine form struck an unbeaten knock of 51 off 54 deliveries to take the Reds to a respectable score of 113. Weerakkody, although a bit too slow, supported her skipper well and made 34 off 53 balls. Ama Kanchana was the pick of the bowlers for Blues with figures of 2 for 25.

With the hope of hunting down 114, Blues batters came out to bat but unfortunately lost their way completely when captain Athapaththu departed in the very first over. After that Blues lost regular wickets and were unable to keep up with the required run rate as they could only muster 88 runs after losing 8 wickets in their 20 overs. Rashmika Sewwandi was the only batter from Blues who looked convincing while making 21 off 18. Tharika Sewwandi who is having great 50 over and 20 over tournaments clinched a 3fer for 14 runs to make a strong case for an international cricket future.

With this win, SLC Reds moved to the top of the points table and have already booked their place in the tournament finals along with SLC Greys.