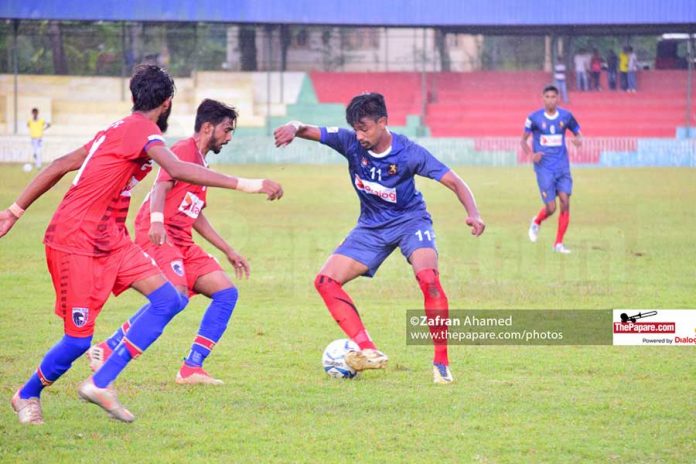 Kelaniya Football Complex witnessed an entertaining game of football in the Dialog Champions League 2018 when Up Country Lions came from behind to beat Negombo Youth 2-1.

Ratnam SC and Solid SC battled out a heated 2-2 draw in their week 7 fixture of the…..

Lions kicked off the afternoon in very good conditions and a lush outfield. They looked deflated with 2 out of their 3 overseas recruits not starting due to injuries.

The first piece of attack came Negombo’s way with Bright Eshun running at the Up Country defense. He was not able to find his strike partner at the crucial point and wasted the opportunity.

John Evans got the first attempt on target for Up Country Lions when a corner kick came his way. The shot was blocked by the head of Kamal Silva who knew little about it.

John Evans once again was clear on goal after a defensive error and took the shot early from out of the box  but only managed to hit it straight at keeper Chinthaka Sujeewa.

Hasitha Chandrarathna got through with a nice one-two play with Evans and once again took the shot early only to find keeper Chinthaka. Immediately after, Negombo went on the break and Shanaka Prasad hit a sitter straight at the keeper Rangana Jayasekara.

The resulting corner gave the breakthrough when skipper Dilan Peiris headed home the corner which Bright Eshun got a slight touch to deflect giving Negombo the lead.

Soon after Up Country were denied once again by keeper Chinthaka when Evans hit one straight at him from close range. The lead didn’t last long when a crossing effort from Dinesh Abeyrathna ended up in the Negombo goal, catching keeper Chintaka in the wrong position.

Both teams worked hard throughout the second part of the first half. Neither were able to create any clear-cut chances as both teams were guilty of losing possession and unwanted fouls.

Just before the break Dinesh Abeyrathna was through on goal from a brilliant long ball. With only the keeper to beat, he chose to hit straight at the stranded keeper.

Chinthaka Sujeewa then made a brilliant save to deny Mohamed Faisal when his header was heading for the right corner from an early cross from the right flank.

Early in the second half Negombo Youth striker Norbert Chibuzor got a free header which was well saved by goalkeeper Rangana diving to his left.

Thushan Dammika then brought down Up Country forward Evans in the midfield area. Anjana Chandimal stepped up and took the kick towards goal. On rushing Chinthaka misjudged the flight and the ball sailed over to give Up Country the lead.

Negombo Youth chasing the game pushed men forward and looked exposed in the back. Up Country were not able to take advantage as they too had bodies behind to defend.

Rangana Jayasekara kept Up Country in the game with a brilliant save to deny Norbert from top of the box with his thunderous shot swerving in the air. Rangana read well to punch it away to safety.

The last 10 minutes of the game was frantic as Negombo Youth kept pushing and created space in the back for Up Country. Deshapriya made a good run from his position in the left to the right and forced Chinthaka into making a save diving to his right.

Despite the onslaught Up Country Lions held on to deny Negombo Youth FC.