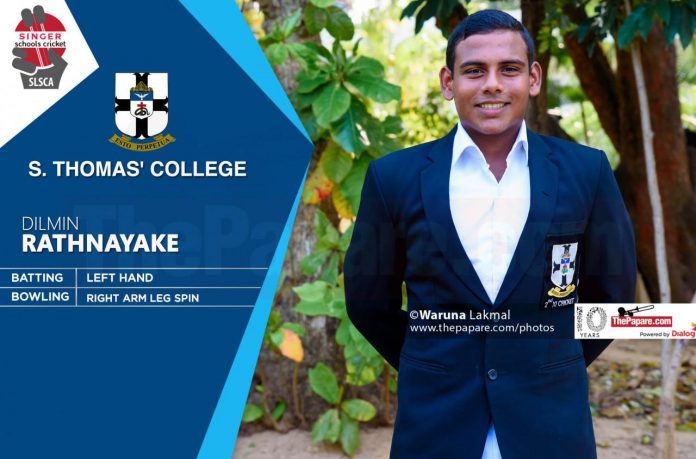 The traditional encounter between S. Thomas College, Mount Lavinia and St. Servatius College, Matara in the Singer Schools ‘Under 19 Division 1’ Two Day Cricket Tournament 2019/20 was worked off today in Mount Lavinia with the hosts claiming the first innings honors in the drawn encounter. Dilmin Rathnayake showed his all-round skills, picking up 3 scalps for 56 runs with his leg spin and scoring an unbeaten 53 runs with the bat for the Thomians.

The S. Thomas College batsmen resumed their first innings on day two at 13 runs for no wicket but both opening batsmen Deon Fernando (21) and Thinuk Liyanage (03) were dismissed in quick succession, putting the hosts’ strong batting lineup under some pressure at 34 for 2. However, the number three batsman Ryan Fernando and the number four batsman Kishan Munasinghe recovered the innings nicely, building a 55-run partnership for the third wicket.

The right hander Ryan Fernando stroked 35 runs off 77 balls with 2 fours before being dismissed by the speedster Madushan de Silva in the 36th over. The right-handed stroke maker Kishan Munasinghe top scored with a knock of 55 runs off 113 balls including 6 fours. The left hander Dilmin Rathnayake coming to bat at number 7 managed to build two key partnerships with Munasinghe and Gavin Botheju for the sixth and seventh wickets respectively.

The Group ‘D’ fixture of the Singer U19 Division 1 Cricket Tournament between Ananda College, Colombo……

Rathnayake built a 43-run partnership with Munasinghe and set an unbeaten 41-run stand with Botheju to go past the opposition’s score. STC put on 207 runs for 6 wickets in 66.1 overs at the close of play on day two. After being so impressive with the ball yesterday, Rathnayake showed his skills with the bat scoring an unbeaten rapid 53 runs off 51 balls with 7 boundaries at a strike rate of 103.92.

In addition, the right handed batsman Maneesha Rupasinghe chipped in with a 37-ball 23 including 2 fours for the school by the sea. Madushan de Silva, the 18-year old right arm fast medium bowler was the most impressive bowler on show for the lads from Matara as he grabbed 4 key scalps for just 37 runs in his 16-over spell which included 8 maiden overs.