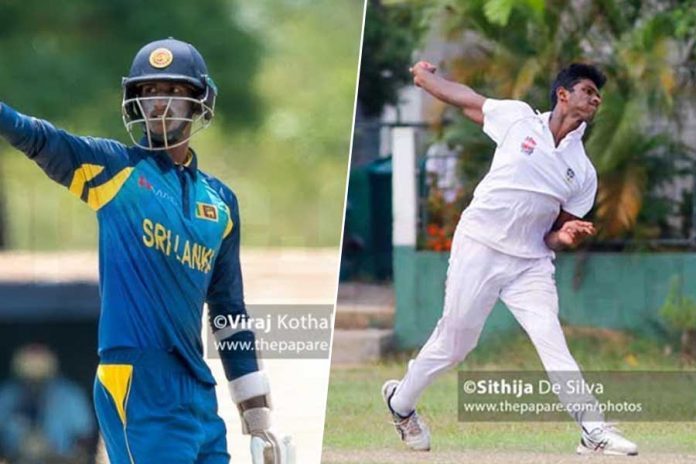 This being the first tournament game for Gurukula College, they did a good job so far in the game to restrict St. Anthony’s College to 177 runs in the 1st innings on a lightning outfield in Wattala and went on to end the day on a high at 109 for 1.

The hosts won the toss and opted to bat first only to see their joint skipper, Avishka Tharindu put up a lone fight to put something up on the board for his team. The Sri Lanka U19 cap amassed 88 runs while batsmen on the other end struggled to cope with the visitors’ bowling.

It was a collective effort from the Gurukula bowling unit as fast-bowler Lakshan Sasanga, left-arm arm quick Praveen Nimesh, Thushara Madushan and Dileep Chamara all bagged 2 wickets each.

In batting, Sasitha Ashan and Sithija Chamod remained at crease overnight with scores of 46 and 43 respectively, setting the base perfectly for Gurukula to dominate the game, going into the 2nd day with 9 wickets in hand in their 1st innings.

The new ball artist of De Mazenod College, Sihina Sithumina, has given them the upper hand on day-one in their group ‘A’ fixture against Isipathana College. The hosts won the toss and inserted the boys from Colombo to bat first. Right-arm seamer Sithumina just ran through the Pathana batting line up as he ended with figures of 5 for 31. The top-scorer for Isipathana College was Kavindu Amantha who posted a steady 43 runs.

Isipathana College were in a wrecked state with only 143 runs on board for their first-innings.

In reply, De Mazenod ended the day at 104 for 4 only 39 runs behind Pathana and a 1st iinings win. They’d be glad to see the morning session off tomorrow to go past the first-innings target and secure the extra points and then would try to bundle up the visitors as soon as they can. Skipper Nimna Fernando is at the crease with 39 runs to his name while the well-built paceman from Isipathana Yasiru Kasthuriarachchi has claimed 2 wickets for 28 runs in the innings so far.