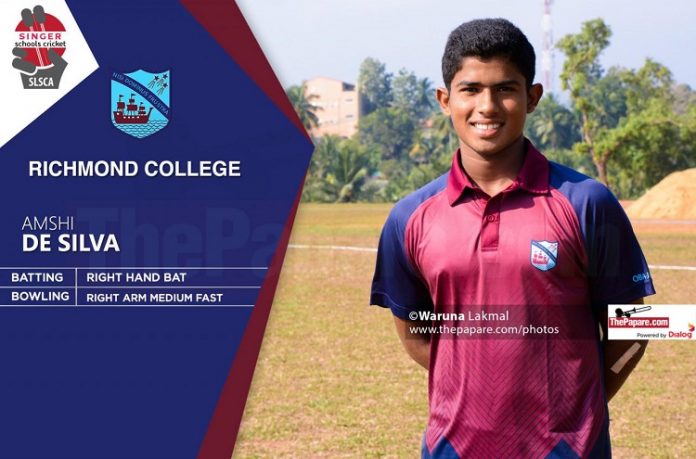 A brilliant bowling spell by Amshi de Silva helped Richmond College defeat St. Joseph’s College by 2 wickets and qualify for the Semi Finals in the Singer Schools ‘Under 19 Division 1’ Limited Over Cricket Tournament 2018/19.

The 35th Battle of the Rocks between Maliyadeva College Kurunegala and….

Ashain Daniel, the skipper of St. Joseph’s College won the toss and chose to bat first at the Galle International Cricket Stadium but the decision backfired as the Joes were bundled out for just 116 runs with Dilesh Perera top-scoring with 48 runs.

Right arm fast bowler Amshi de Silva ripped through the Joes batting line up picking up 7 wickets for 32 runs. Left arm spinner Dilum Sudeera grabbed 3 scalps for 29 runs. In reply, the Richmondites also struggled with the bat but somehow managed to cross the line with 2 wickets to spare.

Bhanuka Manohara (30) and Thaveesha Abishek (20) top scored with the bat for the lads from Galle. Off spinner Ashain Daniel tried his best with the ball taking 4 scalps for 27 runs but his efforts went in vain as he ended up on the losing team.

Lakshitha Rasanjana starred with both bat and ball, guiding Nalanda College to a….