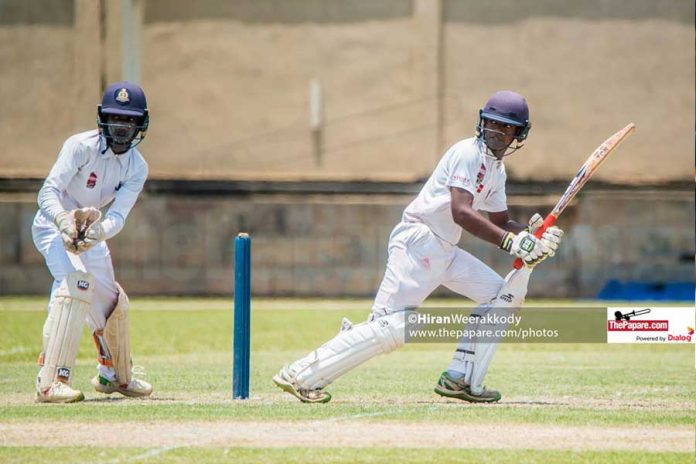 Lakshitha Rasanjana starred with both bat and ball, guiding Nalanda College to a first innings win against Thurstan College in one of the quarter finals of the Singer Schools ‘Under 19 Division 1’ Two day Cricket Tournament 2018/19 worked off today at Mount Lavinia.

After being 329 runs for 6 wickets overnight, Nalanda College decided to declare the innings on 350 runs for 9 wickets. Thurstan College batsmen had a mountain to climb as 350 was a mammoth score to chase down. As expected, Thurstan College could only post 241 runs all-out in 65 overs.

The quarter final encounter between Trinity College and St. Sebastian’s College commenced today at Maliyadeva College Grounds in Kurunegala. The Trinity College skipper won the toss and chose to bat first but his team could only post 165 runs in 51.4 overs.

Abishek Anandakumar who single handedly won Trinity the annual one day encounter against St. Anthony’s with his bowling skills, top scored with 40 runs. In addition, Shane Gunathilaka (38) and Kavishka Senadeera (35) chipped in with useful contributions with the bat for Trinity.

Vinuja Ranasinghe was the pick of the bowlers for the lads from Moratuwa as he took 6 scalps for 48 runs. In reply, St. Sebastian’s College were 86 runs for 3 wickets at close of play on day one, with skipper Nuwanindu Fernando unbeaten on 40 runs.