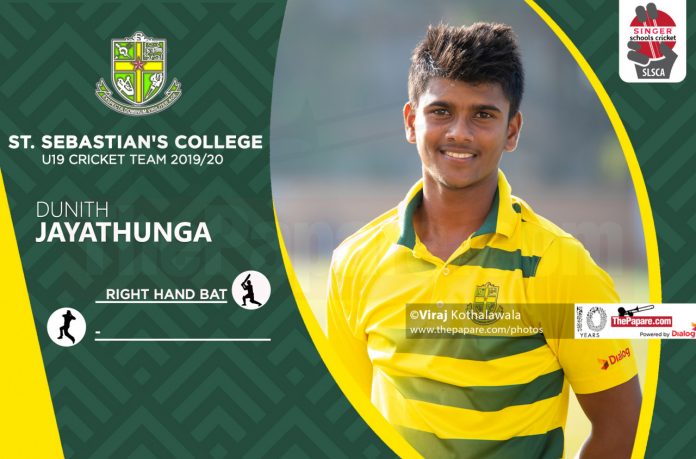 St. Sebastian’s College won the toss and opted to field first at their home grounds in this group ‘D’ fixture. The Wesley-ites batted positively to post a massive 322 runs in their first-innings, seeing out the entire day-one. Buddima Wijesundara top-scored with a fantastic century while Kalana Sandeepa was the pick of the bowlers with 3 wickets for 56 runs.

When the hosts finally got their turn to bat on the second day of the game, it looked an impossible task to take something out of the game for the Sebastianites. But the senior batsman Dunith Jayathunga played a classy knock of 105 runs not-out to gain major honours for his team. The hosts batted with authority as they scored a staggering 326 runs in 63 overs.

D.S. Senanayake College met St. Benedict’s College in their tournament opener at Army grounds in Panagoda. Being put to bat first, the boys from Kotahena posted 184 runs for the first-innings. Thenuka Nandalal scored an unbeaten 45 runs for the Benedictines while Lashen Gunarathne topped the bowing chart with 4 wickets for 51 runs.

In reply, D.S. Senanayake College only managed 133 runs of which more than half was scored by skipper Muditha Lakshan. Muditha scored a valiant 71 runs while Malinda Perera starred with a fifer for the Benedictines.

On their second lease, Bens scored 177 runs for the loss of 8 wickets. Skipper, Shehan Fernando led the batting with 66 runs to his name. Muditha Lakshan was again a notch above the rest in his team as he came out and accounted for 4 wickets off his bowling to make this game more special for him.

D.S. Senanayake College were given a 228-run target to chase down. They only got halfway there before the umpires decided to call it a day.

Punthila Kumara out-played the entire St.Sylvester’s team with his left-arm spin as he bagged a 10-wicket haul in this group ‘C’ encounter at Wickramabahu College grounds, Gampola. The Kandy school was all out for 98 runs in the first-innings and scored only 67 runs in the second-innings for the loss of 7 wickets.

The Thurstanites posted 141 runs for their first-innings in which Ranesh Silva top-scored with 42 runs. Charith Rajaguru was the pick of the bowling for St. Sylvester’s. The game ended in a draw while Thurstanites missed an outright victory by a whisker.

The Antonians are in Colombo for this traditional fixture where they won the toss and decided to bat first. Ananda grounds which had proved to be a high-scoring venue in the tournament so far looked completely out of its norm as both teams fell for low scores within the day.

The boys from Kandy posted 137 runs for the first innings where Nilukshana Udayakumara top-scored with 32 runs while right-arm seamer Dasun Tharuka picked up 4 wickets for 40 runs.

In reply, Ananda College scored 139 runs and the day was also brought to an end with the end of their innings. The game will resume for day-two tomorrow.