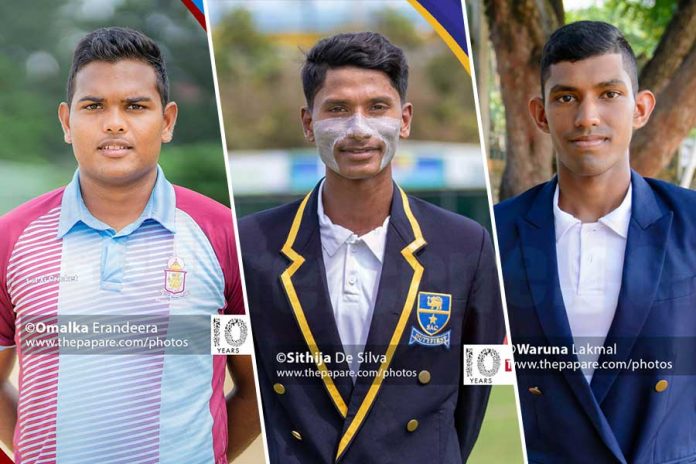 Five games of the Singer U19 Division 1 Cricket Tournament were worked off today, 17th December 2019.

Dharmaraja College gave a roasting to the visiting bowlers on day one of the game where they batted out 95 overs and scored 276 runs. Dharmaraja skipper walked out this morning with an overnight score of 104 runs. He was only able to add 4 more runs to his tally as he departed early this morning while the Rajans innings was also brought to an end with them declaring at 296 runs for the loss of 8 wickets.

The day saw a very late start due to rain and also was closed down early. The Thomians got only 2 overs to bat before the showers washed the day off.

This game looked to be a low-scorer as 23 wickets were taken on day-one. St. Anthony’s College batted, after winning the toss, and scored 159 runs. In reply, St. Sebastian’s College only managed 76 runs for the first-innings.

Coming into day-two with 27 runs on board, St. Anthony’s College turned the entire perception of this game on its head. They racked up a mammoth 301 runs on board for the loss of 8 wickets by close of play. Vishal Silva brought up his second hundred of the season as he wrote an elegant 140 runs against his name.

The game came to a close as a draw after a tough day at work for the home bowlers.

This group ‘D’ fixture is being worked off at home grounds of St. Sebastian’s College where they won the toss and invited the visitors to bat first. It feels like all of a sudden, the tournament has turned around from clusters of wickets to heaps of runs. This is the third game of the day where a team has batted out an entire day.

Buddima Wijesundara was the man who did the bulk of the scoring for Wesley. He struck a strokeful 121 runs while Anudith Wickramasinghe played a supportive role remaining unbeaten at 60 runs at close of play.

Wesley College ended the day at 249 runs for the loss of 5 wickets.

St. Sylvester’s College hosted Thurstan College at Wickramabahu grounds in Gampola in a tournament fixture between the two teams. This too was another rain-shortened game in the day as only about 40 overs were possible in the day.

In that, it took only 36.5 overs for the Thurstanites to undo the Kandy boys. St. Sylvester’s were bowled out for 98 runs with the new-found star of Thurstan College, Punthila Kumara leading the bowling pack. The left-arm spinner recorded his 3rd fifer of the season with figures of 5 for 32.

Thurstan College were at 16 for 2 by close of play.

This group ‘A’ battle is being unfolded at Army grounds, Panagoda. Being put to bat first, the boys from Kotahena scored 184 runs for their first-innings. Thenuka Nandalal top-scored with an unbeaten 45 runs while Lashen Gunarathne was the pick of the bowling with 4 wickets for 51 runs.

D.S. Senanayake College was in a spot of bother at close of play with 98 runs on board for the loss of 6 wickets. Skipper, Muditha Lakshan was fending one end with 54 runs to his name.