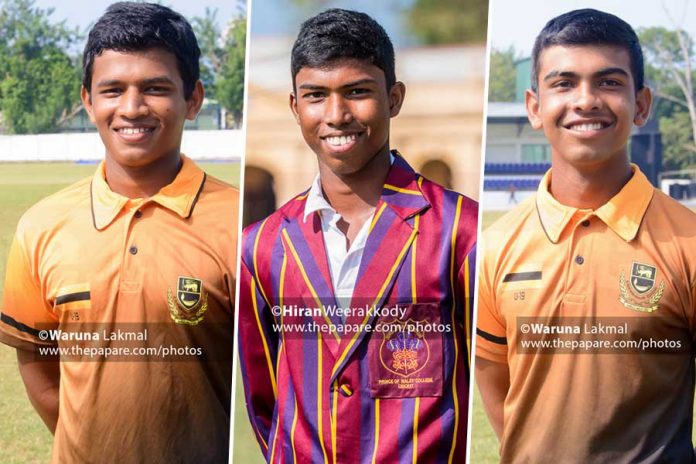 Three games of the Singer U19 Division 1 Cricket Tournament were played today, but unfortunately all the matches were disturbed by the bad weather, resulting in 3 drawn contests.

The second day of the traditional encounter between Prince of Wales College, Moratuwa and D.S. Senanayake College, Colombo was conducted today at the POW College Ground.

Cambrians were 152/7 at stumps on day 01, but soon perished for 181 in the 65th over despite all-rounder Vinuja Ranpul’s fighting 73.  Right arm off spinner Chamath Yatawala inflicted the most damage at Cambrian lower order as he ended up with the figures of 4/39.

In reply, the boys from D.S could only accumulate 151 for their first innings, handing a 30-run advantage to Prince of Wales’ College. Wicket keeper batsman Teron Baskeran was the only player to make a meaningful contribution to the D.S. total, making a fine 64. The Cambrians got to bat for only 6 overs in their 2nd innings as bad light came into play and the umpires decided to call curtains on the 2nd day of play.

After winning the toss, the Negombo boys elected to bat first at the Galle International Stadium and they were on 149/7 at stumps on Day 01 as the rain hindered the 1st day’s play. Unfortunately, the 2nd day was also washed out, keeping the players at the sidelines all day, bringing the group ‘A’ contest to a draw.

The same story was fashioned at the Campbell Park where the Ananda-Wesley battle was limited to only 39 overs. No play was possible today.