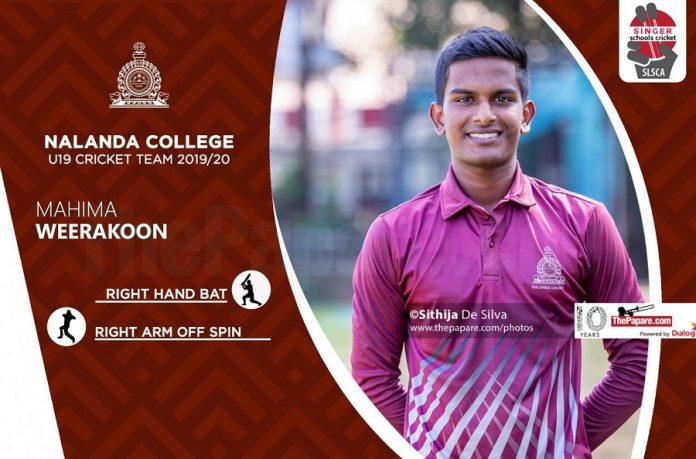 Nalanda College managed to take first innings points in their Group C encounter against Mahanama College, which ended in a draw today at Nalanda College Grounds in Colombo. After being 48 runs for 5 wickets overnight, the hosts managed to show a better batting performance today, adding another 146 runs for the remaining 5 wickets.

Muditha Premadasa, first to reach 1000 runs in the season

The right-handed stroke maker Mahima Weerakoon stroked an unbeaten 82 runs, which came off 155 balls including 7 fours. In addition to this, Moksha Sankalpa contributed with a 33-run knock. Nisal Akash, Devindu Kekirideniya and Achintha Supun picked up 3 scalps each for the visitors.

Mahanama College began their second innings 19 runs ahead and posted 184 runs for 3 wickets at the close of play on day two. The right-handed batsman Pawantha Weerasinghe, who has been in great touch this season, stroked a half-ton while Pulshan Rohana made 37 runs with the bat.

The Group D encounter between Zahira College and St. Thomas’ College ended in a draw today at Uyanwatta Stadium in Matara. After getting a solid start with the bat, the visitors faced a collapse as they were bundled out for just 124 runs in 55.3 overs. Sineth Sithara was the pick of the bowlers for the hosts as he took 5 scalps for 42 runs.

The Group D encounter between Wesley College and Lumbini College ended in a draw today at BRC Grounds in Colombo. However, the first innings points went to Wesley College. After being 50 runs for no wicket overnight, the Lumbini College batsmen posted 217 runs in 52.3 overs. Prabashana Gamlath (38) and Ravindu Rasanka (33) were the chief contributors with the bat for Lumbini College.

Semila Liyanage was the pick of the bowlers for Wesley College as he took 6 scalps for 69 runs. Thenuka Perera gave him a good support at the other end, taking 3 wickets for 56 runs. Wesley College began their second innings 49 runs ahead but made only 145 runs, setting a target of 195 runs for Lumbini College.

Thashika Nirmal starred with the ball taking a 5-wicket haul taking match tally into 8 wickets for 156 runs. The chase was not on for Lumbini batsmen as there were only 13 overs left in the day. Thus, the match ended in a draw.

The Group C encounter between Maliyadeva College and St. Anthony’s College commenced today at St. Anthony’s College Grounds in Wattala. After being put into bat first, the visitors posted only 146 runs with Gayan Karunanayake being the top scorer with 37 runs. Avishka Tharindu picked up 3 scalps for 23 runs while Amitha Sandeepa, Kaveesha Dulanja and Dinuk Vishal grabbed 2 scalps each for the hosts.

In reply, the hosts were in a spot of bother losing 3 wickets for 59 runs at the close of play on day one. Matheesha Weerasinghe bowled an excellent spell, picking up 2 wickets without giving away a single run. The match will continue tomorrow for day two.