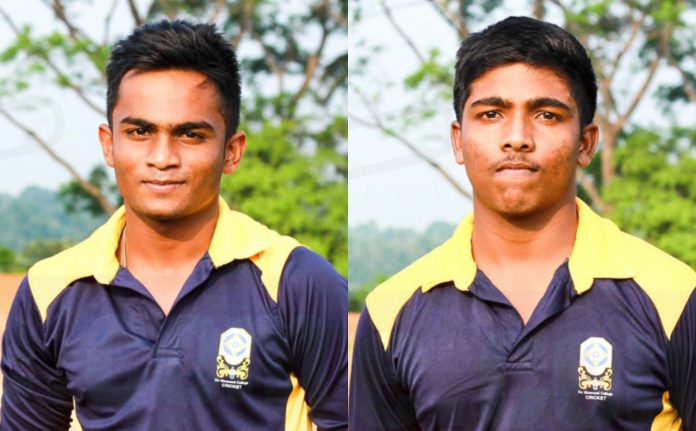 De Mazenod College managed to take first innings points in their Group A encounter against D. S. Senanayake College, which ended in a draw today at De Mazenod College Grounds in Kandana. The visitors resumed day two on 93 runs for 6 wickets and added another 87 runs for the remaining 4 wickets, as they were bowled out for 180 runs in 66.4 overs.

Sasika Chandira (49), Teron Baskaran (38) and Manura Gathsara (32) chipped in with useful contributions with the bat for the visitors. The right-arm seamer Asitha Silva was the chief demolisher with the ball as he picked up 5 scalps for 63 runs. Sihina Sithumina gave him good support at the other end by taking 3 wickets for just 22 runs.

After being asked to follow on, the visitors did not display an improved batting performance as they were bowled out for 186 runs, setting an easy target of 87 runs for the hosts. Asitha Silva who picked up a 5-wicket haul in the first innings starred again with the ball, taking another 5-fer. However, the De Mazenod College batsmen had only 7 overs to reach the target; therefore they didn’t go after it and were content with a first inning win.

>>Muditha Premadasa, first to reach 1000 runs in the season<<

The Group C encounter between Mahanama College and Nalanda College commenced today at Nalanda College Grounds in Colombo. The Nalanda College skipper Avishka Perera won the toss and asked the visitors to take the first lease of the wicket. However, the visitors were bundled out for 175 runs in 75.3 overs, with Dileesha Thuduwage being the top scorer with a half-ton.

Jithesh Wasala (4/45) and Dineth Samaraweera (3/34) starred with the ball, sharing 7 wickets among them. In reply, the hosts struggled with the bat as they lost 5 wickets for just 48 runs at the close of play on day one. Nisal Akash (3/15) and Achintha Supun (2/00) were instrumental in causing the batting collapse of the hosts. The match will continue tomorrow for day two.

The Group D encounter between Zahira College and St. Thomas’ College commenced today at Uyanwatta Stadium in Matara. After winning the toss, the St. Thomas’ College skipper opted to bat first and put on a solid 252 runs on the board. Nipun Samarasinghe top-scored with a half-ton, while Hirusha Jeewadith missed out a well-deserved half-ton by a run.

Mohamed Mahdhi bowled extremely well, dismissing 4 key scalps of the hosts’ batting lineup. In reply, the opening batsmen of Zahira College got them off to a solid start, putting 34 runs on the board without losing a wicket at the close of play on day one. The match will continue tomorrow for day two.

The Group D encounter between Wesley College and Lumbini College commenced today at BRC Grounds in Colombo. After winning the toss, the Wesley College skipper chose to bat first and posted 266 runs in 74.4 overs. Sahil Dias (58) and Nimthaka Adikari (51) shone with the bat scoring half-tons for Wesley.

Ramesh Madusanka was the pick of the bowlers for Lumbini College as he picked up a 4-wicket haul for just 49 runs. In addition to this, Yasiru Jayasinghe and Tasika Nirmal picked up 3 scalps each. The Lumbini College opening pair got them off to a good start as they ended the first day’s play at 50 runs for no wicket. The match will continue tomorrow for day two.