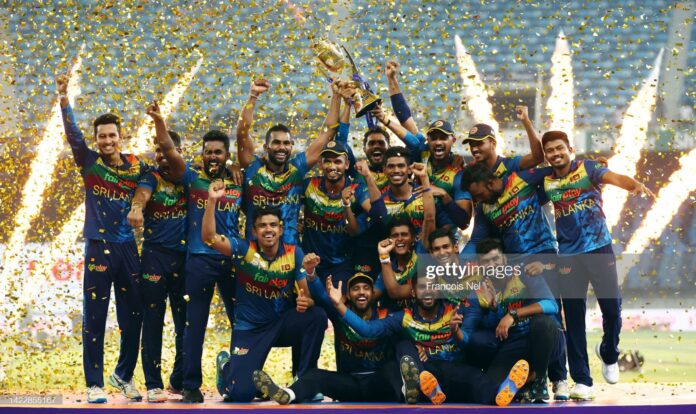 Sri Lanka put together an outstanding performance in the field to defend 170 in the Asia Cup Final, ultimately bowling Pakistan out for 147 to win by 23 runs.

The toss was expected to play a huge role in the game, with results in Dubai heavily favouring the teams chasing – of 21 games, 18 have been won by the team chasing (the only three matches won by the side batting first were against Scotland, Hong Kong and Afghanistan). So when Dasun Shanaka lost the toss, Sri Lanka’s chances, at least in the hearts of those following the game, plummeted.

True to form batting first, they had a poor start, losing Kusal Mendis in the first over to an inducker from Naseem Shah. Pathum Nissanka fell a couple of overs later and when Haris Rauf removed Danushka Gunathilake for 1, Sri Lanka slumped to 36/3 inside the power play.

Dhananjaya de Silva looked in prime form during his stay at the crease, driving with ease to find the boundary, but Pakistan just kept picking up the wickets, with de Silva and then Dasun Shanaka falling to the spinners.

At 58/5 in 9 overs, it was looking like it would be a one-sided Asia Cup Final, but Bhanuka Rajapaksa and Wanindu Hasaranga had other ideas. The pair went on the counter-attack, scoring 58 off 36 deliveries, with Hasaranga looking especially fluent.

His dismissal came at a crucial stage, Rauf once again the man with the golden arm, but Rajapaksa continued with his onslaught, finding the boundary regularly and running hard between the wickets. Another 50 run partnership for the 7th wicket and crucially, a momentum shifting final over of Sri Lanka’s innings saw them post 170.

Pakistan, who had fielded so well throughout the tournament, put Rajapaksa down twice on 46 and 51, Shadab Khan, a brilliant fielder in his own right, being involved on both occasions.

Sri Lanka’s defense started poorly, with young Dilshan Madushanka conceding 11 off the 1st over, which included a no ball and 7 wides in a 11 ball affair. However, he made up for it with a brilliant reflex catch in the 3rd over to give Pramod Madushan Babar Azam’s wicket off a loose delivery outside the leg stump, before the right arm quick picked up Fakhar Zaman off the next ball.

This gave Sri Lanka the edge, but Rizwan and Ifthikar Ahamed rebuilt the Pakistani innings and with the likes of Khushdil Shah and Asif Ali to come, the game was evenly poised with even with 4 overs to go.

Hasaranga, who had gone for 25 off his 1st three overs, bowled the 16th and it was he who broke the back of the Pakistani chase, picking up the well-set Rizwan, Shah and Ali and conceding just 2 runs.

From that point it was just about Sri Lanka holding their nerve, and hold their nerve they did, bowling Pakistan out off the last ball of the innings to win by 23 runs.