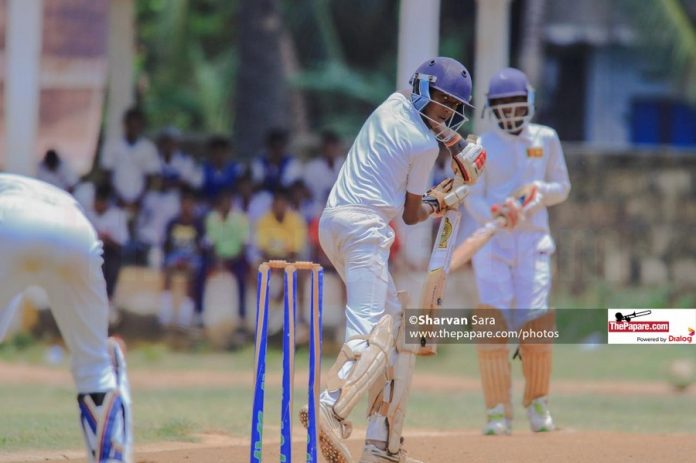 St. Anthony’s College, Kandy and St. Joseph Vaz College, Wennappuwa qualified for the final of the Singer Under 15 Division 1 Schools Cricket tournament, as they defeated Trinity College and Mahinda College in the semi final encounters respectively.

St. Anthony’s College defeated Trinity College on bonus points in the semi-final which was worked off today at the Bandaranayake College Grounds in Veyangoda. After winning the toss, the St. Anthony’s College skipper opted to bat first and the Antonians put 117 runs on the board for the loss of 6 wickets in 54.4 overs.

Thisara Ekanayake (26*) and Anjula Bandara (20) top scored with the bat for St. Anthony’s College. Themiya Jayasundara picked up 2 wickets for 20 runs for Trinity College. In reply, Trinity College posted 49 runs for 5 wickets in 17 overs at stumps. Lahiru Abeysinghe was the star performer with the ball as he grabbed 3 wickets for 25 runs for the Antonians.

According to the rules of the tournament, when a match is ended without a result in the knockout stage, the winning team is decided based on bonus points, thus St. Anthony’s College was awarded the win as they have managed to register more bonus points than Trinity College.

St. Joseph Vaz College defeated Mahinda College on bonus points in the other semi-final which was worked off on Sunday (08th) at the D.S. Senanayake College Grounds in Colombo. Menusha Perera, the skipper of St. Joseph Vaz College, won the toss and invited the opposition to take first lease of the wicket. Mahinda College posted 190 runs for 8 wickets in 100.4 overs before declaring their innings.

Dinura Kalupahana was the top scorer for the lads from the south as he made 38 runs while Chandrapa de Silva (37) and Banuja Dulnath (37) chipped in with useful contributions with the bat. Vishwa Rajapaksha and Dasun Perera starred with the ball for St. Joseph Vaz College picking up 3 wickets apiece.