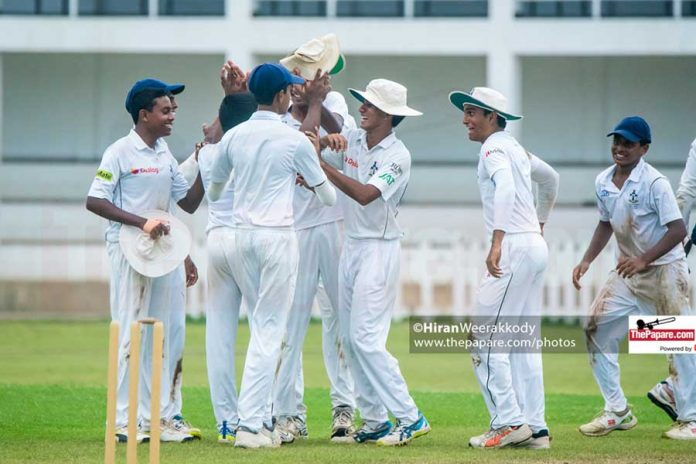 After winning the favour of the coin toss, Thomian skipper opted to send out his men to bat first. They got a good opening stand of 50 runs which was used well by the number 3, Ryan Fernando who struck a brilliant 60 to give the Thomians high hopes of a big score. But, things got loosened up and as the rest of the Thomian batting line-up only managed 41 runs altogether. Thomians slipped to just 161 runs in 48.1 overs.

It was the big fish in the circuit, Dunith Wellalage, who spoiled the party for the boys from Mt. Lavinia. He was flawless as the left-arm spinner bowled an exceptional spell of 9.1 overs for just 7 runs and picking up 3 wickets. The spell also saw 5 maidens in it.

It seemed an easy chase for the defending champions, St. Joseph’s College, with the lightning-quick outfields of St. Sebastian’s grounds. But, the boys from the school by the sea came back very strong as they made the Josephian outfit look very ordinary with the bat. Wickets kept tumbling one after the other in a rush and in no time S. Thomas’ College had recorded their victory. The Josephians were bowled out for just 88 runs.

Randiv Gunasekara was the pick of the bowlers for S. Thomas’ with excellent figures of 3 for 12 while Anuk Palihawadana and Aneesh Kamalchandra picked 2 wickets each.

The most from a Josephian was the 27 runs made by Sheran Fonseka while only Shenuka de Silva managed to score past 20 runs in the rest.

That means it’s going to be a S. Thomas’ College vs St. Sebastian’s College in the semi-finals while the other semi-final will be a replica of the battle of the golds as D.S. Senanayake College will take on Mahanama College.