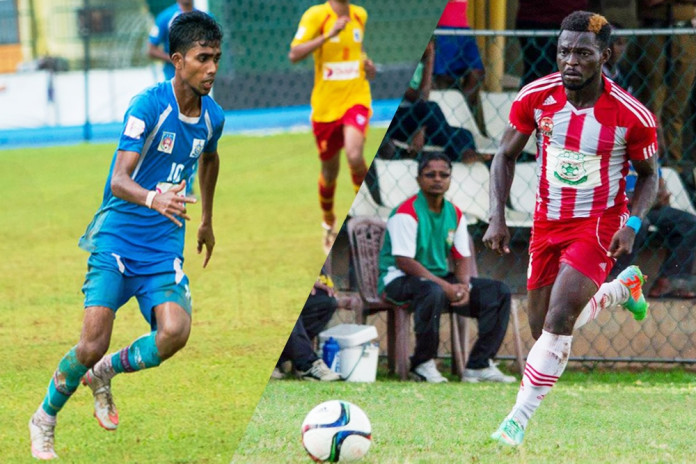 New Youngs and Air Force SC booked their places in the FA Cup Round of 16 after two intense penalty shootouts against Navy SC and Negombo Youth.

Both matches between the four Champions League sides were called off at half time last weekend with the scores nill all.

New Youngs tipped last year’s FA Cup semifinalist Navy SC out of the competition in an intense shoot-out with a score lie of 6-5, after regulation time ended in a scrappy 1-1 deadlock.

The hosts Navy took the game to the visitors during the first few exchanges as they wanted to seize the initiative of the penultimate 45 minutes ahead.

Their attitude didn’t match their final product as they couldn’t find a telling pass to put their front men through. Yet on the 63rd minute the hosts’ captain Krishantha Perera found K. Sudarshan with an excellent ball from the right-wing, although the midfielder’s initial shot was parried by the keeper the ball kindly fell into Sudarshan’s feet giving him a second chance to make amends as he slid the ball past a helpless keeper.

The visitors started gaining more control in midfield after going behind as they kept searching for an equalizer.Despite their efforts the Sailors held firm at the back ticking valuable time away from the clock.

As the game looked drawing to a close with a narrow win for Navy, Hasith Priyankara sold a dummy to his opposite number to unleash an absolute screamer from 30 yards out leaving the Navy keeper with little to ponder in the 91st minute.

The final whistle blew a short while after sending the game into a deciding shoot-out.

With the first five penalties being put aside with little ease by both sides it came down to sudden death.

However the biggest talking point of the game came just before K.Sudarshan stepped up to take the sixth penalty, when the opposition goal scorer replaced the New Youngs’ shot stopper.

It was goal scorer against goal scorer to start off the sudden death phase. Adding to the drama Sudarshan’s shot was saved by Priyankara only to be called back by the referee to be taken again as he adjudged Priyankara to have stepped out of his line to save the penalty.

With tensions rising the referee blew the whistle for Sudarshan to make up for his previous mistake. He did little well to his team as he smashed his shot up against the keeper to be denied for the second, yet it wasn’t done and dusted as the referee called it back for the penalty to be taken yet another time much to the disgust of the visiting bench and coaching staff.

It wasn’t third time lucky for Sudarshan as he missed the yet again from the spot leaving the home crowd in anxiety. There wasn’t to be any slip up by Mohamed Fawsan as he rattled the back of the net sending his team through to the pre quarters repeating their upset against the same opposition last year in the Champions League.

Priyankara had a game to remember as he couldn’t set a foot wrong, his heroics both as an outfield and in between the sticks single handedly carried his team through to the next round.

Same cannot be said by Sudarshan who unfortunately turned from hero to villain as his penalty miss cost his team dearly.

The match ended in a draw with no team scoring squandering numerous opportunities.