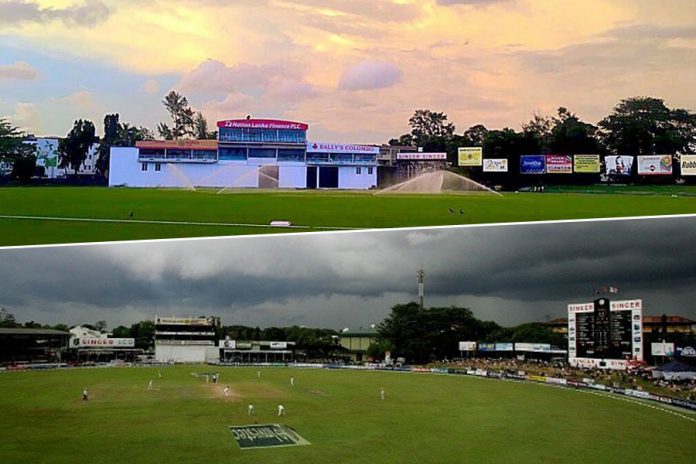 Like the scenic tea estates and the never-ageing railway grid, Cricket is another beautiful thing that the British left behind in Sri Lanka. The Ceylonese did not see any other sport which suited their persevering character and tropical culture so well other than cricket, hence, they embraced the sport.

None of Sri Lanka’s traditional sports ever required such sophisticated playing areas as cricket did, and that made every single stadium a thing to behold among the Lankans. Cricket travelled to every corner of the Island in no time. And with the popularity the sport gained, cricketing venues, which were limited to the elite Colombo, crossed borders and started emerging across the country. Today the Island nation has 7 international venues and 3 others which are defunct. Let’s start with the oldest of them all.

Paikiasothy Saravanamuttu Stadium or the Colombo Oval for the ones from the 70s. This is the 53rd Test venue in the world and of course the 1st in Sri Lanka. It staged Sri Lanka’s first Test against England in 1982 and Sri Lanka’s first Test win in 1985. It is also the first venue to host a neutral Test match when the Aussies played Pakistan in 2002. Shoaib Akthar recorded one of the finest hat-tricks of the game here.

A marshland in Wanathamulla was converted into the best cricket ground Sri Lanka had by then. It was the efforts of an illustrious civil servant named Paikiasothy Saravanamuttu to erect a ground for his cricket club the Tamil Union Cricket and Athletic Club. The Colombo Oval was built in 1945 and gifted to Ceylon for its whistle-stop matches. In 1977, after the death of Saravanamuttu, the ground was renamed after him in his honour.

This is the only ground in Asia where the great Donald Bradman himself played competitive cricket in. When you enter the stands of the P. Sara Oval hangs a huge photo of Bradman walking out to toss with the Ceylonese great Mahathevan Sathasivam. It is said about 20000 people flocked into the P. Sara to witness the legend in action.

The Ivy-covered scoreboard is another unique aspect of P. Sara that anyone who’s been there will remember. It is said that Bradman himself praised the scoreboard as ‘the most descriptive scoreboard in the world.’

Quite incidentally, the row of Palmyra palms looming over the ground from the far end, a rare sight in Colombo, is reminiscent of the connection the stadium holds with the Jaffna Tamils who were instrumental in the birth of it. Given the natural wetness of the soil beneath, the buffalo grass on the field, which is another unusual ingredient in an international Test venue, could make it extremely humid at the centre. But, if you can beat that heat, the creaking ceiling fans, the polished wooden benches, the boards with great names to have graced that field and the images of stalwarts of the game just create a perfect setting for you to spectate a game of Test match cricket.

Among a lot of things that raise eyebrows about the P. Sara Oval, one thing that stands out is the female pitch doctors that you see in action. It all began with Mariamma in 1947 who was the head ground lady who prepared strips even for the greats like Bradman, Gavaskar, Miller, Worrell and Botham. Since then, it has passed down the generations and even today women are a part of P. Sara’s ground staff. These are ladies who live beside the ground and have a strong connection to the soil in P. Sara. Famous writer Nicholas Brooks describes them as the ‘Earth Mothers’ in one of his works.

The best place to watch the game in any cricket ground is the press box behind the bowler’s arm, but as an ordinary cricket fan, you’d love to witness cricket at P. Sara Oval from the Mahathevan Sathasivam stand that adjoins the bar right next to the sight-screen. The scoreboard will be right across from there and you will not miss any action from that area.

This is where cricket began to blend into Ceylon. The club is the oldest first-class club in Sri Lanka, the first known competitive cricket was played here by the Englishmen. The ground and the club were originally made to keep the passion for cricket of the English rulers alive. ‘Coloured’ people weren’t given the privilege of utilizing these facilities back then. Not just the Lankans, but even the coloured men in visiting teams from across the world weren’t allowed to use the nets or the bar. It is to break free from that discrimination that the Singhalese Sports Club was formed.

The CCC is located in the affluent end of Colombo where you see designer-made gardens and marble studded parapet walls. Sports-loving ladies and gentlemen, who come for a walk with their retrievers leashed, would often stand outside the fencing at CCC and get a glimpse of matches. Right across, on the other side of the ground, is a famous food-truck at Maitland Crescent. From salesmen who are on fieldwork to the parents who are waiting for their kids to finish cricket practices, everyone would stop at the food-truck and have a plain-tea and a puff of ‘Gold-leaf’, in an absolutely Sri Lankan style, while blaming the selectors for not selecting the fast bowler whom they just saw at the centre.

This is one of the smallest Test grounds in the world and has staged 3 Test matches from 1984 to 1987. This is where Brendon Kuruppu scored his world-record double hundred on debut. Sir Richard Hadlee seemed to have loved the ground as he picked up 10 wickets in the ground’s first Test and two years later scored an unbeaten 151 in its last Test.

Today, the ground is defunct in the international arena. But, remains an active venue in first-class cricket. If you are around Maitland Crescent and are planning to watch cricket at CCC to kill a few hours, the place to sit would be on the concrete slabs under the rows of trees on either side of the grounds. You’ll end up squarer of the wicket but the breeze, the shade and the closeness to the action will compensate for it.

Three doors up the road from CCC is the SSC. The club was founded in 1899, for the affluent Sinhalese in the country who developed a love for the sport. The club was formerly functioning at Victoria Park and in 1952 they moved to better facilities in Maitland Crescent when they bought a piece of land which was used as an aerodrome by the Allied forces during World War II. Soon the pavilions started to erupt with several sponsorships by leading businessmen and organisations in Sri Lanka. The giant scoreboard was built in the mid-70s and soon the television facilities were also set up to make the ground eligible to host international games.

Massive names of Sri Lankan history like Sir James Peiris, D.S. Senanayake, Sir John Kothalawala and J.R. Jayawardena have all held the presidency of SSC. Such connections gave SSC the exposure it required to earn its elite status. Even the Sri Lanka cricket headquarters share the same door number with SSC. This is one of the finest outfields in Asia and the ground has hosted the most number of Tests in Sri Lanka by far.

Sri Lanka has played 43 Tests at SSC and won 20 matches out of them against the 9 losses. If SSC is the fortress, then Mahela Jayawardena and Muttiah Muralitharan are the commanders in chief here. This is also Jayawardena’s home ground, the champion has 2921 Test runs here at the SSC. Meanwhile, the spin-wizard has seized a remarkable 166 wickets there. Murali also has 117 wickets and 111 wickets at Asgiriya and Galle respectively. The next man closest to this in a single venue is James Anderson who has 103 wickets at Lord’s.

At SSC anywhere in the lower stands would be an irritating experience if you are a person who wants all the details. The iron bars will obstruct your view. The best place to be at SSC is the balcony next to the members-only A/C lounge. That’s right behind the bowler’s arm and gives a good vantage point of the scoreboard and play. Getting here shouldn’t be very tough unless the Barmy Army is here.

Asgiriya Stadium, Kandy – The embassy of the visitors

If someone is trying to find reasons as to why Sri Lanka has such a poor win percentage here, it could only be the fact that the visiting teams don’t have to fight the weather in Kandy. Probably, the best weather to play cricket in Sri Lanka.

“Colombo is the hottest place I have ever played cricket, Kandy is fine!” – Nasser Hussain

Asgiriya stadium was built by the principal of Trinity College, Rev. Alec Garden Fraser in 1915 for the schoolboys at Trinity to enjoy their cricket. In 1981, to gain Test status Sri Lanka had to develop the infrastructure at the Test venues. Then chairman of Sri Lanka Cricket, Gamini Dissanayake, who was an old Trinitian, decided to convert his school grounds into an international stadium. The ground met all the standards in just 150 days. In 1982 Australia played the hosts in Asgiriya, making it the second Test venue of Sri Lanka. This is the only Test ground which was run by a school.

The ground was in business till 2007, hosting 21 Tests and 6 One-Day Internationals. But then granted retirement to fade away, back to being a prominent schools cricket venue.

Cricket at Asgiriya is a serene sight to watch. Under the low looming clouds and with the hills drawing the horizon at the far end, the grandstand is situated at a prime point in the ground, right across the scoreboard and behind bowler’s arm.

Moratuwa people love their carving and their cricket. They take a lot of pride in everything famous about them and cricket begs to be on that list. Even a random tuk-tuk driver, who you hail a ride with, will give you an update on that weekend’s game at De Soyza Stadium. They aren’t the ordinary fan who cheers every boundary, they would appreciate a good leave. Sadly, Moratuwa didn’t get enough international cricket played there.

The stadium was an initiation of Albert Hildebrand Theodore de Soysa who gifted a plot of his family land to build the stadium. The stadium was a regular venue for tourists during the pre-test era. West Indians played here in 1979 but the first Test was played in 1992 when the Aussies played the Lankans. Four tests were played here in over a year and then the ground was left to rest from Test cricket.

The best view is of course from the tall stand erected next to the press box straight down the ground. This is where the cricket-lovers from the neighbourhood would spend a Saturday evening watching any cricket being played here.

These are the very first venues where Sri Lanka played Test Cricket. The oldies. Some have retired and some may be soon. But their legacies will always last. Keep an eye out for part-II of this series, let’s discuss the moderns there.