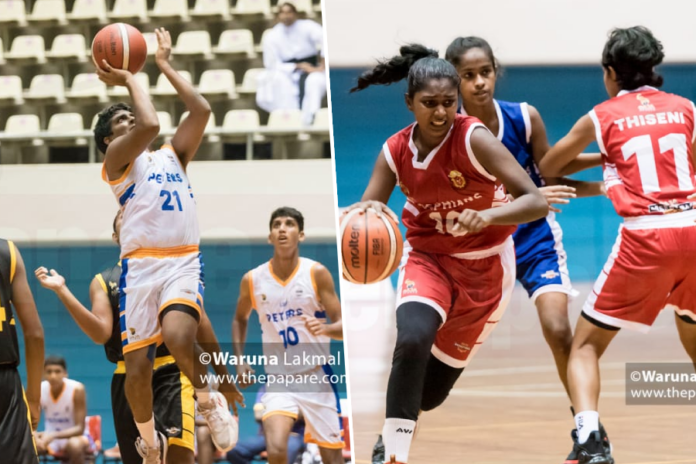 St. Joseph’s Girls School, Nugegoda secured a dominant 36 – 25 win against Good Shepherd Convent, Kotahena whilst St. Peter’s College, Colombo secured the third-place title with a 10-point win over D.S Senanayake College, Colombo in the Under 20 Schools Basketball ‘A’ Division Consolation Finals held on the 18th May (Wednesday) at the Sugathadasa Indoor Stadium.

St. Joseph’s Girls’ School was in control of the game from the tip-off and maintained the lead till the last minute of the game. Although they lost to Holy Family Convent in the semi-finals, they had the mindset to give their best in this match.

Both teams were lacking confidence in their offensive strategies but the defensive plays and the fast breaks of the Josephians helped them stay ahead.

St. Peter’s College saw off D.S. Senanayake College to win the third-place playoff with a scoreline of 71-61. In the maiden quarter, the Dons topped the scoring sheet and in the second quarter, the deficit was down to just 2 points.

The second half of the game was led by the Peterites as they opened their scores with a dashing 2-pointer by Randil Henry. D.S. Senanayake College getting into fault troubles by the fourth minute of the 3rd quarter cost the game for the boys from Wijerama Mawatha.

The early free throws in the third quarter converted by St. Peter’s College made the difference in the scoreboard giving the boys from Bambalapitiya a consolation win in the competition.

The much-awaited ‘A’ division finals will be played tomorrow (19th May) at Sugathadasa Indoor Stadium. The Grand Final in the Girls’ Category will be between Holy Family Convent, Bambalapitiya and Mahamaya Girls School, Kandy which will commence at 2.00 P.M and will be followed by the Boys’ Final between St. Joseph’s College, Colombo and Royal College, Colombo.