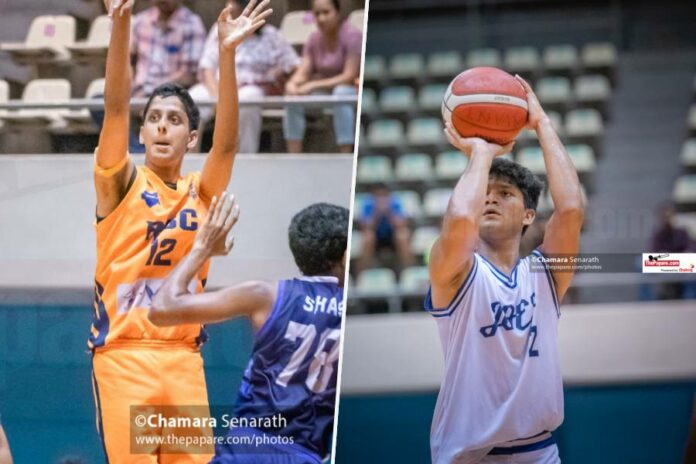 Royal College advanced through to the Schools Under 20 ‘A’ Division Championship finals after a tight tussle against St. Peter’s College which ended 77 – 75.

From the tip off both teams fought hard, scoring consistently as the lead went back and forth. The first half ended with a 5-point lead in favor of the Reid Avenue boys. However, in the second half the Peterites found their rhythm in both defense and offense and fought back with back-to-back three pointers and jumpers by Randil Henry and Nipun Fernando.

Nevertheless, Royal skipper Yuganan Baskaran and Senu Rathanayake managed to lead their team to victory. The shots taken beyond the ark gave them the chance to hold on the lead throughout the game, the intensive defense employed by Royalists too was outstanding.

St. Joseph’s College emerged victory in the second semi-final match played against D.S. Senanayake College. It was a rather one-sided affair for Joes where they dominated the rebounds and made easy baskets to get an early lead. Joes skipper Shehan Fernando, Keith Costa and Darren Bernard were the top scorers for St. Joseph’s College whilst Evin Senarathne and Seneth Semitha topped the scores for D.S. Senanyake College. The finals scores stood at 87 – 36.

The boys’ and girls’ consolation finals and finals have been postponed due to the prevailing situation in the country.

Keep it logged on to ThePapare.com for more on the U20 Schools Basketball Tournament 2022.