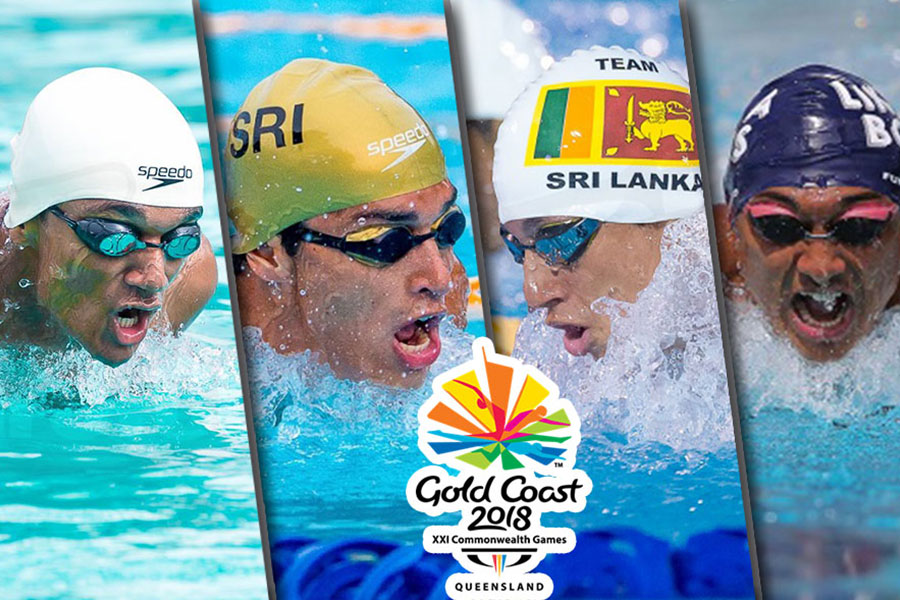 The recently concluded Commonwealth Games brought up new records and milestones for the Sri Lankan Swimming contingent. Is this the best-ever Commonwealth for the swimmers? In a complete unexpected turn of events, a swim quartet made it to a final and Mathew Abeysinghe broke the 23sec barrier.

Swimming sensation Matthew Abeysinghe snared the limelight at the recently concluded Commonwealth Games in Gold Coast, Australia setting 2 new national records in the 50m and 100m Freestyle events. He was also a part of the first-ever Sri Lankan swim team to make it to the final of the 4X100m freestyle relay clocking 3:22:84 minutes in their heat finishing 5th. His brother Kyle, following close behind, had similar performances being the second fastest swimmer within the group of 4 which included the Abeysinghe brothers Akalanka Peiris and Cherantha De Silva. In their history making final, the team was unfortunately disqualified in the final lap with De Silva jumping in early.

Commonwealth Games: Swimmers off to the Final

The inaugural Commonwealth Games was in Hamilton in 1930 and Sri Lanka swimming first participated in the Games in the 1938 Sydney Commonwealth Games. Measured in yards at the time, Frank Digby Swan swam the 110-yard (100m) Freestyle event as the first and only Sri Lankan swimmer to compete in the prestigious event. After a long pause due to World War II, the Games restarted its course in 1950, the year history books started to write themselves, for the island with Olympic Gold Medalist Duncun White bringing home Sri Lanka’s first of few Golds in the Commonwealth Games, running the 440-yard hurdles. Alongside the champion, was Sri Lanka’s D Arndt swimming the 110 and 440-yard freestyle event.

Skipping the 1954 games, Sri Lanka resurfaced in 1958 at Cardiff with T De Saram swimming the first Women’s event with M.A.Williams swimming the 220 Yard Breaststroke. Similar appearances by the women in 1966 (Margaret De Seram) and 1982 (Udeshika Biyanwila) with no participation from the Men’s category until 2002 in Manchester England when Conrad Francis competed alone in the 50m, 100m Butterfly as well as the 100m Breaststroke heralding a new phase for Sri Lanka swimming.

The 2018 Games brought about four men with equal passion but very different swim styles. Although the Abeysinghe siblings competed in the same events, 50m Free 100 Free and 4X100m Free relay, Cherantha De Silva and Akalanka Peiris specialized in the butterfly and back respectively. Returning to the Games from Glasgow 2014, Cherantha De Silva competed in 5 individual events and 1 relay. However, the only notable event for him was the relay, not being able to pass the heats in his individual events.

Akalanka Peiris, swimming in the relay and 4 other individual events took one, the 50m Backstroke, all the way up to the semi-final. He finished 6th in the semi-final standings with 26.52 seconds. The Backstroke contest started in the 2006 Melbourne Games with Arun Karunaratne clocking 29.01 seconds. Heshan Unamboowe came to play in 2010 and 2014 clocking 27.87sec and 27.86sec. Unquestionably, Akalanka Peris has topped his predecessors at this year’s games, but his teammate Matthew still holds the record in the short course format at 25.57 seconds, a record he established in the 2014 World Championships.

Was Matthew’s record breaking 22.65 in the 50m Free the best Sri Lanka has seen in the games? Undoubtedly! He became the first Sri Lankan to break the 23 second barrier both in SC (22.98 in 2013) and LC at this meet with his timing. After Digby’s attempt in 1938, Arun Karunaratne, Stephan Lee and Anthony Wickramasinghe were the next male swimmers to compete in the event all clocking over 25 seconds. Heshan Unamboowe’s best at the Games was a 25.55 seconds finishing 39th in the 2010 Delhi Games. Cherantha De Silva did himself one at the 2014 Glasgow Games clocking 24.34 seconds to finish 31st. Matthew Abeysinghe topped De Silva’s timing by nearly 2 seconds this year etching one more record to his name.

Commonwealth Games: All hopes on a stronger and faster Matthew

Matthew wasn’t done with his record breaking performance, as the 22-year-old bettered his 100m SC timing of 49.75 with a 49.11seconds LC in this year’s Games. Matthew clocking in 54.40 at the 2010 Games in Delhi was still better than Cherantha’s 55.08 timing in Glasgow.

According to the official results of the Commonwealth Games Federation, this was the first time a Sri Lankan Men’s 4x100m relay team competed with Matthew, Kyle, Cherantha and Akalanka forming the quartet. Not only was participation a milestone for Sri Lanka, the boys carried their nation all the way to the final. Sri Lanka clocked in 3.22.84 minutes in their heat finishing 5th in front of Gibraltar who were disqualified. The final race was an 8-nation battle with Australia, England and Scotland taking home medals. Sri Lanka hung in there till finisher Cherantha De Silva made any swimmers single worst nightmare, an early charge. Dismay it was for all at home to witness such a tragic ending to a magnificent start; nevertheless, the team will hold high with the success they have achieved on behalf of their country.

Apart from the relay, Matthew Abeysinghe was the game changer at this year’s Games earning himself two new National Records in the 50 and 100m Freestyle events. It is quite clear that this is the best Sri Lanka has achieved in the Commonwealth Games over the years of participation. But the question is, is this it? Or will a Kyle or a Cherantha rise to the occasion and take us places in the International game?

Leave your comments and thoughts below: