Home Features Commonwealth Games: All hopes on a stronger and faster Matthew 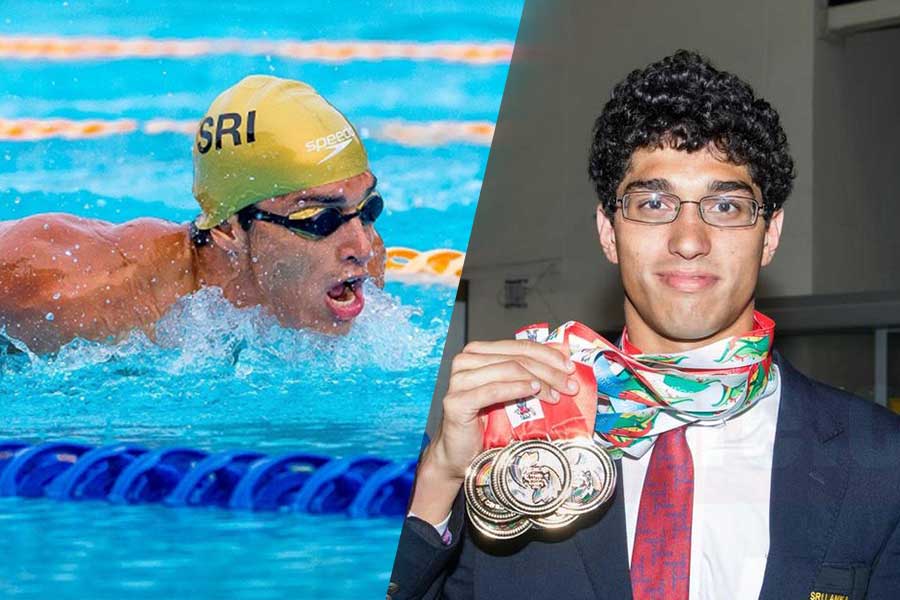 Matthew Abeysinghe turned 22 on March 19. Five days later Sri Lanka’s top male swimmer swam a personal best in the 100 metres freestyle – 42.53 seconds, his timing coming in yards – and qualified for the 2018 NCAA Championships, where the cream of swimmers from Universities around the United States take part.


Know your swimmers for Commonwealth Games 2018

Six of the top swimmers in Sri Lanka have been selected…

This timing when converted to LCM or Long Course Metres – the US is the only country in the world that also competes and keeps records in SCY (short course yards) – is 48.77 seconds.

To put that into context, when Matthew qualified for the 2016 Rio Olympics, he did it in 50.48, earning him an Olympic B standard time and becoming the first Sri Lankan to qualify for the Olympics and not just be invited under the country quota system.

In just under two years, he has shaved off nearly two seconds in the 100M Free. Does this mean the best is yet to be seen from Matthew?

Who shuttled their way to the 2018 Commonwealth Games?

“Definitely the best years are ahead of me,” says Matthew soon after he had competed in Minnesota, and just before leaving to join the rest of the Sri Lanka swimming squad training in Australia for the April 4-15 Gold Coast Commonwealth Games.

“I am just beginning to get stronger and I am as hungry as ever to succeed for myself and for my country,” adds Matthew, who is in his second year at Ohio State University, where he is majoring in sports psychology.

He is repaying the faith Ohio University has vested in him by offering a swimming scholarship. Now, hopefully, he can also pay back the trust and confidence local swimming and the Sri Lanka National Olympic Committee (SLNOC) has placed in him, with a noteworthy performance at the Commonwealth Games when the action commences in the pool on April 5.

“My target is as always which is to do my best for Sri Lanka. I will do well if I am able to swim as fast as I did at the Big Ten Championships (for Ohio University or Buckeyes) about a month ago (42.58/SCY) or when I qualified for the NCAA Championships (42.53/SCY),” Matthew reveals.

As a 14-year-old wet-behind-the-ears teenager, Matthew first competed for Sri Lanka at the Commonwealth Games, in New Delhi in 2010. Four years ago, he chose not to go to the 2014 Glasgow Games as his focus was on the Youth Olympics Games which coincided that same year.

Stronger and faster, Matthew will carry the hopes of Sri Lanka in the pool. An injury – knee and then finger – soon after the Rio Olympics has troubled him over the last year and it has only been in the last six months that he has been able to regain full fitness.

“I missed two FINA World Championships, one in Canada and the other in Hungary because of my injuries. I wasn’t even able to train properly at University but thankfully I have recovered and been able to focus fully for the last six months.

“And even though I missed a lot of training, I was able to make it to the NCAA Championships in my first year in college and my converted time in the 100 freestyle (48.77) would have been faster than the A qualifying standard for the 2016 Rio Olympics,” Matthew discloses.

The Olympics is his Holy Grail and Matthew is proud that he is the first Sri Lankan to reach an Olympics on merit.

“It was a great honour for me to be the first and only Sri Lankan to do that. I worked really hard and made huge sacrifices. I can remember, even when I was six-years-old, my dream was to represent Sri Lanka at the Olympics.

“I missed the opportunity to swim at the London Olympics (2012) because another swimmer was on an Olympic scholarship and the only way for me to get selected was to achieve the Olympic standard. But looking back, I’m glad it happened this way because I qualified to participate in my first Olympics,” says Matthew.

Rio was an experience Matthew will never forget. It was his first while it was the last for the greatest swimmer in Olympic history, Michael Phelps. Now Matthew is looking ahead to Tokyo, in 2020. Before that is the Commonwealth Games, where he will have the company of younger brother Kyle, who is also a member of the Sri Lanka swimming squad.

Matthew will swim in all the sprint events – 50M/100M/and 200M which is his pet event and also in the 4X100 freestyle relay, which he is looking eagerly to as he gets the chance to swim with Kyle.

“Kyle just turned 18 in February. We have both swum together, the last time being at the South Asian Games in India in 2016. We won a gold medal in the 4×100 freestyle relay.”

He has two other brothers, Andrew and Dillon, and the siblings hold the national record for the 4×50 medley relay.

“It is always fun to swim with my brothers. Kyle and I were supposed to swim together at the FINA World Championships in Canada, but I missed out due to my injury. He swam well and broke a couple of national records including one of my own. The Commonwealth Games will be our first major competition together and I’m really looking forward to it,” Matthew added.

Growing up with three brothers has honed the competitive streak in Matthew’s nature – “It was a competition whatever we did, from seeing who could finish our milk at the dinner table to playing video games or football in the backyard” – and he displayed this at the 2016 SAF Games in India when he picked up 10 medals including seven gold, two silvers and one bronze. He also holds 10 national records.

Along with Matthew and Kyle Abeysnghe, Sri Lanka will also be represented by Cherantha De Silva, Dimuth Peiris, as well as females Vinoli Kaluarachchi and Dilruskhi Perera at the Commonwealth Games.

All eyes will however be on Matthew.