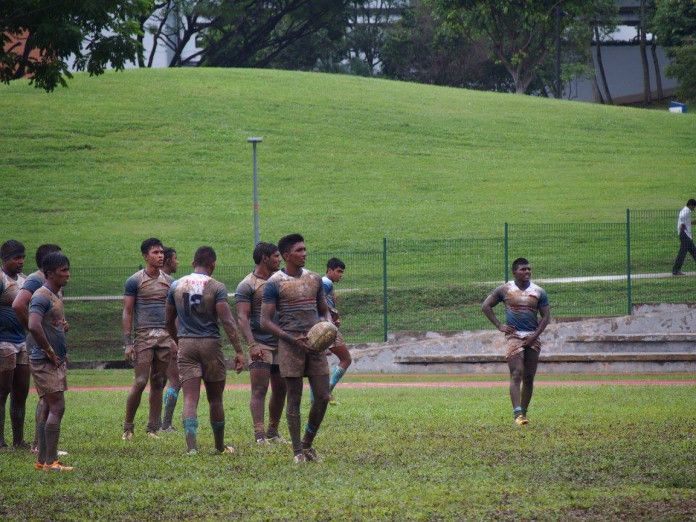 The Junior Tuskers secured a comfortable 47-12 victory in their final encounter against Chinese Taipei in the 2015 edition of the Junior World Rugby Qualifier held in Singapore.Sri Lanka who were eyeing the qualification had their hopes crash-landing when they lost to Hong Kong two days earlier after a close encounter and were all out to prove themselves in the final game.

Coming out in a positive note, skipper Omalka Gunaratne’s Sri Lankan outfit gained momentum right from the beginning with Nishon Perera drawing first blood for the Tuskers. Taking up kicking duties from Reeza Raffaideen, Isuru Kongahawatta missed out on the early conversion as Sri Lanka had to be contempt with a 5-0 lead in the fifth minute of play.

Replying to Perera’s try was Chinese Taipei who took the lead with the conversion sailing through the posts with the restart but the Lankans were quick to counter with two consecutive penalties by Isuru Kongahawatta got them to 11 points. (11-7)

Hitting the pedal on the gas was Reeza Raffaideen who mastered his attacking lines from the back sending it out wide to Nishon Perera who offloaded it on to Umesh Madushan who did the honors in scoring the second try for the Tuskers. Nishon Perera continued to rattle the Chinese Taipei defense; this time on the far right corner as he offloaded it onto Umesh Madushan who scored his second for the team. Kongahawatta converted 1 out of the 2 Madushan tries (23-7)

Minutes before referee called for half time, it was Kevin Dixon who startled the opponents covering almost 70 meters from his own 22 meter line to score on the farther right.

The Tuskers started the second half in style with Isuru Kongahawatta making use of the open spaces in the opponents square as he stepped his way and offloaded the ball onto Mithila Perera who scored under the posts. Kongahawatta made no mistake with the conversion (35-7).

Taipei replied with a try off the forward maul as Yei Weithey touched down for their second but that did not stop them to turning things around against Sri Lanka (12-35). Moving on to a different strategy, the Lankans utilized a 5-meter lineout to their favor as Shawket Lahir barged through the ruck to score the next.

The center duo for the Tuskers, Kevin Dixon and Nishon Perera enacted a final phase before the referee called it a day as Kevin Dixon intercepted the ball in his own 10 meter line and covered almost 80 meters before passing the ball onto his counterpart Nishon Perera who scored the final try for the Tuskers in this ASIAD. Kongahwatte sent the easy conversion through as final scores read 47-12.
The Junior Tuskers registered a comprehensive victory against Chinese Taipei but the decision on who would qualify for the Junior World Series that is scheduled in next April will be decided by the victor of the Hong Kong vs Singapore game. If Singapore turns tables with Hong Kong, the chances of Sri Lanka getting the ticket to Zimbabwe next April is a possibility.