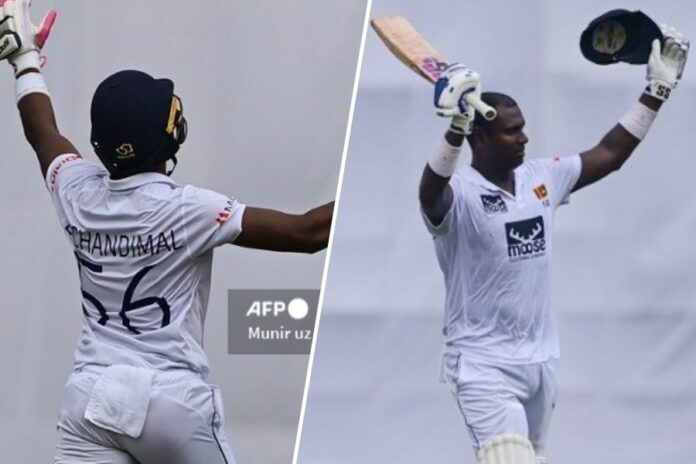 Centuries from Angelo Mathews and Dinesh Chandimal, as well as some quality seam bowling from Kasun Rajitha and Asitha Fernando put Sri Lanka in a strong position at the end of the fourth day’s play of the 2nd Test in Dhaka.

Sri Lanka resumed their first innings on day four at 292/5 with Angelo Mathews (58*) and Dinesh Chandimal (10*) unbeaten at the crease.

The duo continued to pile on the runs putting on a massive 199-run partnership for the 6th wicket. The two seasoned pros did not to let their guard down at any point as they batted out two sessions on day four.

Both of them got their deserved three-figure landmarks in the post Tea session. Mathews brought up his 13th Test century and his 2nd ton of the series while Chandimal notched up his 12th Test ton, his first since 2018.

After two consecutive wicket-less sessions, the hosts finally managed to produce a breakthrough in the final session dismissing Chandimal for 124 runs. After Chandimal’s dismissal at 465/6, Sri Lanka’s tail couldn’t make a significant contribution with the bat as they lost the remaining 4 wickets for 41 runs as they were bowled out for 506 runs.

Mathews walked back unbeaten on 145 runs as the visitors finished their first innings with a vital 141-run first innings lead. Bangladesh bowlers were inconsistent with their lines and lengths throughout the innings but Shakib Al Hasan did keep things quiet and finished with yet another 5-wicket haul while the speedster Ebadot Hossain was impressive in patches as he finished with a 4-wicket haul.

In reply, Bangladesh faltered with the bat as they lost 4 top order wickets in the tricky last passage of play heading into the stumps. Another exceptional bit of new ball bowling from Kasun Rajitha and Asitha Fernando put Sri Lanka well ahead in the contest heading into the final day.