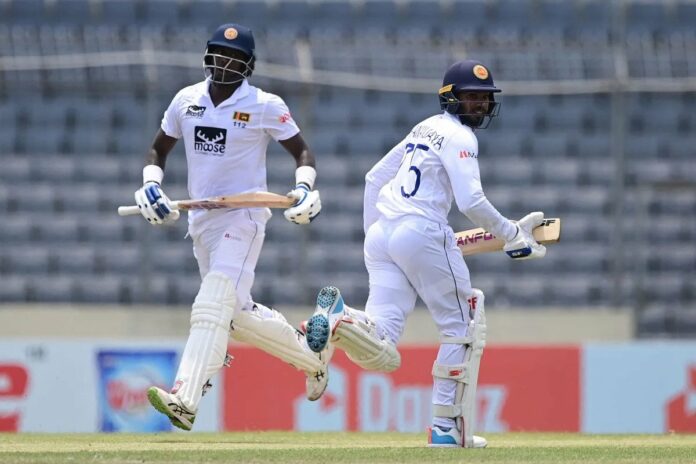 After 2 early blows in the day, Sri Lankan batters Angelo Mathews & Dhananjaya de Silva compiled a gutsy partnership of 102 to bring the deficit down on a rain hit 3rd day at Mirpur as 39 overs were lost.

The overnight batters for the visitors, skipper Dimuth Karunaratne(80) &  Kasun Rajitha(0) both were dismissed within the first hour of play to push Sri Lanka into the back foot. Mathews who had a mixed bag outing during the first game with a magnificent 199 and a disappointing 0 was on song once again as he absorbed the pressure of early wickets and accumulated runs choosing the lose deliveries well. De Silva on the other hand played the role of the aggressor as he looked for runs from the word go. He even scored 3 boundaries in a single over of Ebadot Hossain, two of them which were sweetly timed and one which was an outside edge.

The 5th wicket partnership continued to blossom for the visitors as de Silva reached his 10th test fifty and Mathews reached his 38th half-ton. Just as the partnership passed 100 and the scoring rate started to improve, Al Hasan struck a vital blow to take his 2nd wicket of the day. This dismissal was a result of a very good review by Bangladesh after an appeal for a caught behind was turned down by the on-field umpire.

Just before the Lunch break the match was interrupted by a passing shower which sized up and delayed the resumption of play by over 2 hours. The match  resumed at 3.30 PM (Ban Time) with 37 overs remaining in the day as it was announced that the 4th & 5th day will begin 30 minutes earlier than usual.

With the fading light and floodlights turned on  (along with complaints from the batters about sighting the ball) the 3rd day continued till 6.00 PM (Ban Time) as Mathews & Chandimal managed to survive after the  dismissal of de Silva. Mathews who fought valiantly over the course of the day was unbeaten on 58 while his partner Dinesh Chandimal was looking solid  on 10.

With a lead of 83 the hosts will be looking forward to knocking over the remaining 5 wickets as the pitch has already started to show some considerable spin while for Sri Lanka it’s a matter of getting a good lead over the 1st innings total of the hosts.