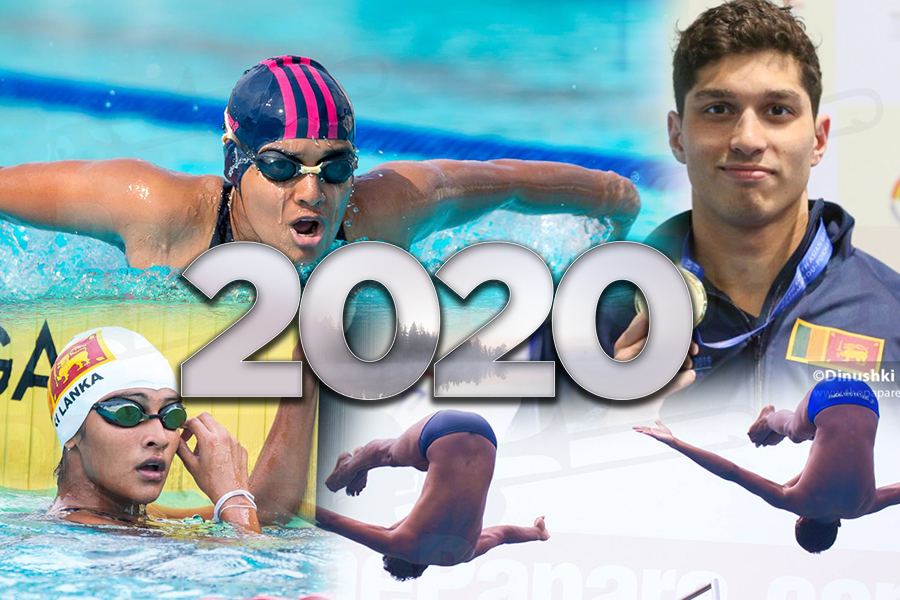 With the dawn of a new decade, Sri Lanka’s swimming fraternity is buzzing with excitement over a full calendar of competition throughout 2020. From Novices to Schools to National to International, the Sri Lanka Aquatics Sports Union has finalized an official calendar for the next 365 days.

Abeysinghe in 7th heaven at SAG 2019; National Record for Sandu

The first set of local swimming events will splash off in February with the National Age Group Selection Trials and the Sri Lanka Schools Novices Championship taking the Sugathadasa Waters. Four international events are planned for the year, the 56th Malaysian Invitational Age Group Championships in March, the 16th Singapore Open in June and the 15th FINA Short Course which will happen in December.

The big one for the year will be the XXXI Olympic Games scheduled from the 24th July to 9th August in Tokyo, Japan. 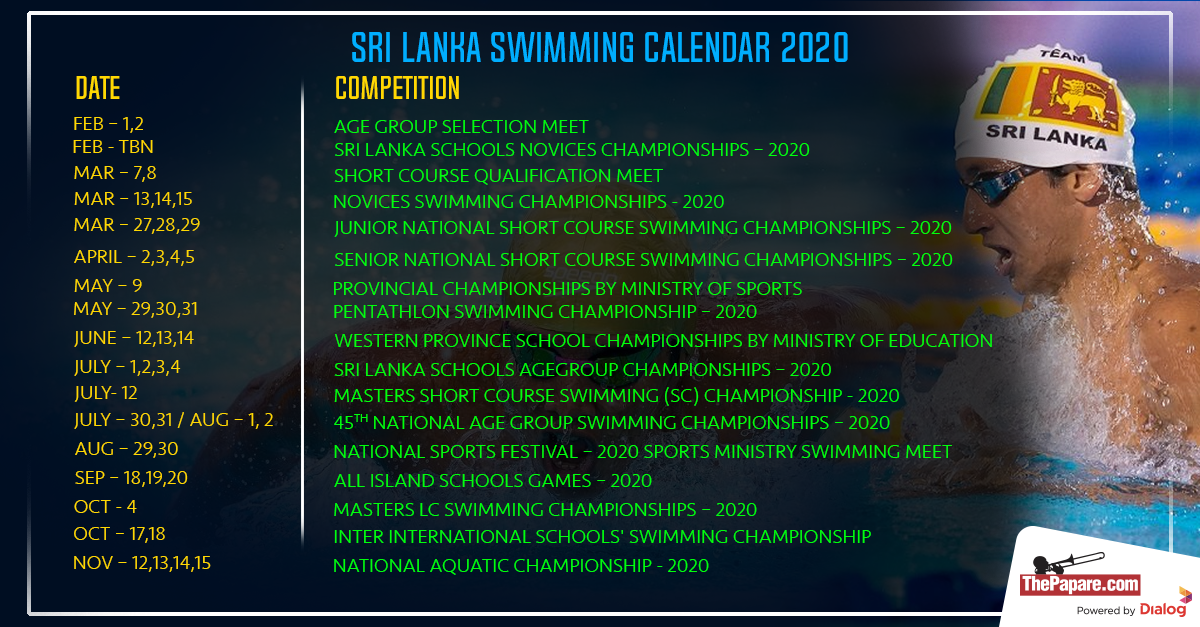 Akalanka Peiris managed to clinch yet ………

The Divers will have four major meets this year, starting from the Novices Diving Championship in March. The Sri Lanka Schools Diving Championship will follow in July with the National Age Groups and National Championship scheduled for August and November respectively. Further, one recognized Regional meet will be identified, and a team will be fielded for it during the year.

As usual, the Open Water Sea swims will kick off the calendar mid-January, with the 10th National Open 5km Sea swim scheduled to take place on the 12th of January. The National 10km Open Water will follow later in the month.

February will host the Annual 2 Mile Sea swim as well as the 83rd Annual 2-mile Sea Swim, organized by the Kinross committee. March will see the final 6-mile sea swim to close out the season.

One international meet will be see representation from Sri Lanka this year, the FINA World Junior Open Water Swimming Championship in August, while other regional event participation is yet to be decided.

Participation at the 5th FINA Men’s and Women’s Youth Water Polo Championship is yet to be decided. 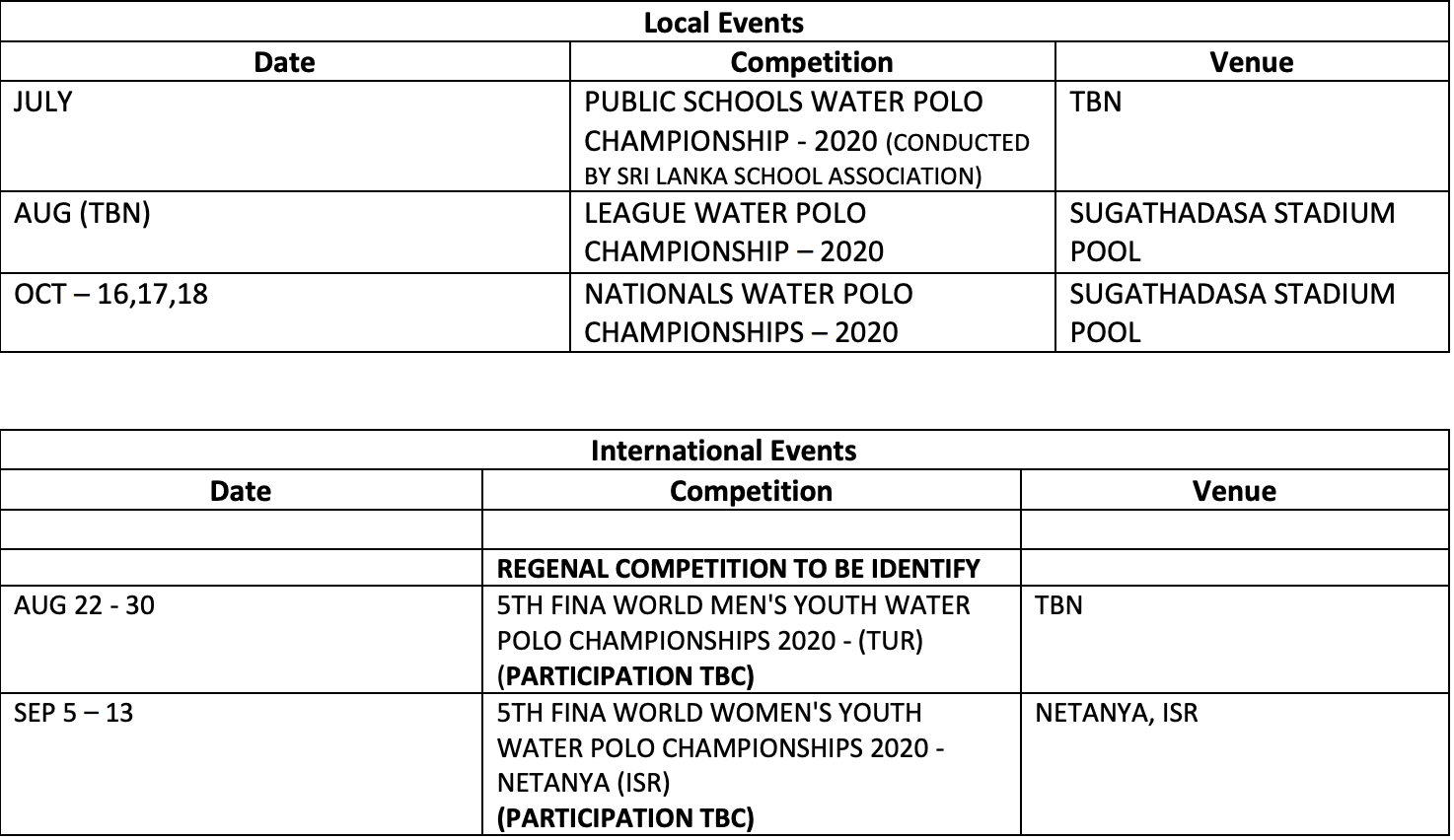 Last but not least, the mid-year will be well rounded by the Synchronized swimming meets starting with the Novices Meet in May. National Age Groups, National Championship and the Levels Competition will then follow in June, September and October marking the end of the local events for the year.

The Singapore Nationals is the only confirmed meet in international waters to date, while participation in the FINA World Junior Artistic Swimming Championship is yet to be decided by the board.

As always, ThePapare.com will be bringing you all the action and excitement from the Pool in 2020, so make sure to keep it logged all year round!