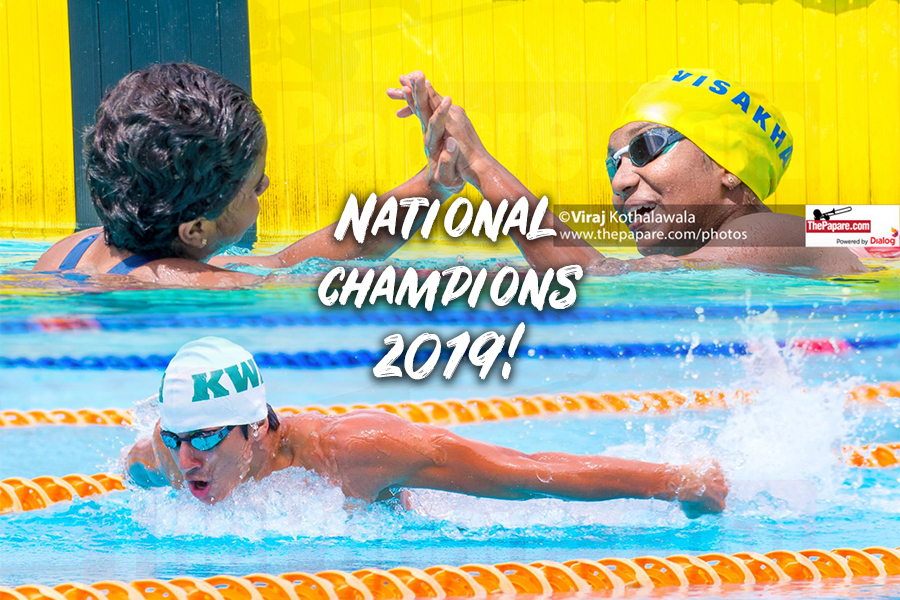 The Junior and Senior National Aquatic Championship commenced on the 31st of October at the Sugathadasa Waters, and the 2019 titles were competed for over 4 days. While Killer Whale and Visakha claimed convincing victories in the Senior categories, the girls and boys of the Lyceum clan dominated the junior category.

Visakha Vidyalaya held a commanding lead over Lyceum International School Wattala to win the Senior Women’s title with points for the 1st and 2nd reading 243 and 190 respectively. The once mighty Sirimavo clan came in third with 109 points.

While the Wattala branch claimed the Girls’ title, the Junior Boys title was won by Lyceum International School Nugegoda with 127 points in total. St. Peter’s College came in second with a close 118 points to grab Silver as Ananda College took home Bronze.

15 new records were established at the meet in both junior and senior formats. The biggest outcome in terms of records came from National cap Akalanka Peiris, as he broke the Men’s 50m Backstroke National record with a swim of 26.27sec. Peiris was the holder of the previous standing record which he established at the Youth Olympic Games in 2018 at 26.33sec.

Fourteen-year-old Minagi Rupasinghe of St. Bridget’s Convent established three records to her name. She claimed the 100m and 200m Backstroke events with record times of 1:11.23min and 2:35.88min. She also won Gold in the 400m Individual Medley clocking 5:52.69min which was also a renewal of the meet record.

Thinaya Jayarathne of Lyceum International School Panadura won the Girls’ Under 15 200m Breaststroke with a record time of 2:56.40min.

Nesha Rathnyake of Stafford International School walked away with 2 records to her name, the under 15 50m Butterfly and 50m Freestyle. She finished the Fly in 30.48sec while her Freestyle timing of 28.78sec was enough to renew the standing record.