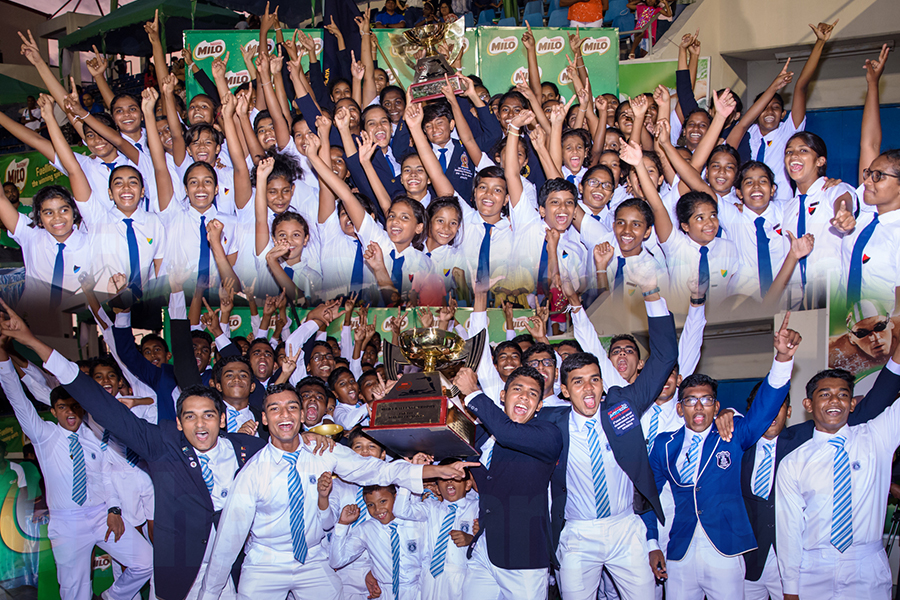 Visakha Vidyalaya broke the 20-year reign of Mahamaya Girls’ College Kandy to be crowned champions of the Sri Lanka Schools Swimming Championship 2019 while St. Joseph’s College went untouched to the title for the 16th consecutive year.

With Mahamaya Girls’ College Kandy being the undisputed champs of the Sri Lanka Schools Girls’ title for the past two decades, it was as if there were no true contenders to change the fate of the title. However, the mighty swim crew from Visakha broke the curse and have started what they’d hope will be another long-term reign.

Meanwhile in the Boys’ category, St. Joseph’s managed to keep their nemesis St. Peter’s, away from their throne for yet another year, proving once again that the boys from Darley Road are the best of the best.

Visakha Vidyalaya managed to hold on to their lead against the mighty Mayans to get up to a total of 509 points to win the overall title. Mahamaya Girls College had a taste of Silver after quite a while with 398 points while Sirimavo Bandaranaike Balika Vidyalaya finished third with 329 points.

St. Joseph’s College won this years’ title with 453 points, a substantial lead over the Peterites who settled with the Runners-up trophy at 378.50. Ananda College finished third in the list with 298 points while Royal capped 4th with 212.

Bishop’s College and Royal College retained their winnings for yet another year as they were crowned the Girls’ and Boys’ Diving Champions of 2019, respectively.

The Bishopians, who never fail to leave a mark in the Diving pool earned 132 points this year, which was enough to retain their title. St. Bridget’s Convent emerged Runners-up with 105 points while the Visakhians managed to finish in third.

Royals’ whopping 203 points got them a no-contest win over S. Thomas’ College who could only manage 51 points to finish with Silver. Thurstan College finished third in the overall standings with 37 points.

Although they let their title slip away, Mahamaya Girls College managed to win the Girls’ U20 Overall team championship with 208 points.

A total of 41 records were renewed at this year’s meet, including the relays, with some individuals taking credit for multiple winnings.

Among them, Vihanga Caldera of St. Peter’s College claimed 3 records winning 45 points for his alma mater and was crowned the Boys’ U12 individual champion. The Boys’ U14 individual title went to Bihandu Hansana of Sri Devananda College who was also able to establish three new meet records.

A usual at the podium, Ramudi Samarakoon of Visakha Vidyalaya renewed three meet records to win the Girls’ U18 Individual title. Her teammate Sandu Savindi won the Girls’ U20 title, also with three new meet records in her name.

I M Haathim, Oneli Yahampath, Hiruki De Silva, and Sandev Senarath went home with 40 points each and 2 records for each of them. They were also crowned individual champs in their respective age groups.

A dawn of a new era begins as the Girls’ title travels from Kandy to Colombo!