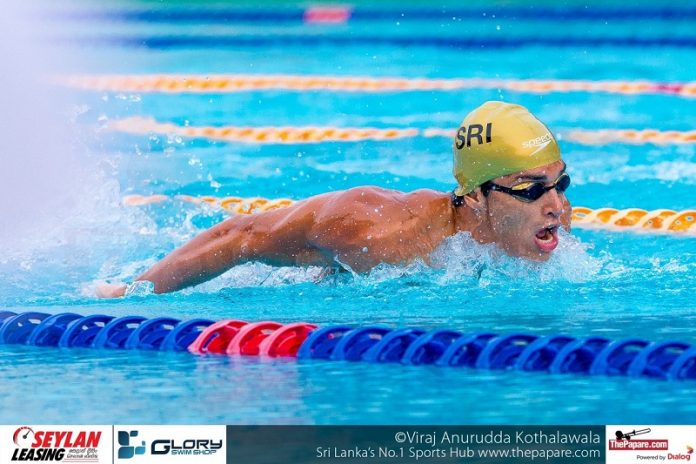 Mathew Abeysinghe continued his unstoppable form at the 13th South Asian Games as he snatched 3 Golds on the final day of the Swimming leg at the International Sports Complex, Satdobato, to finish with 7 Gold medals in total.

Abeysinghe kicked things off for Sri Lanka and himself in style on the final day of the swimming leg of the games, shattering the existing National Record in the Men’s 200 Individual Medley, to take Gold. With barely a break between the events, Abeysinghe then went on to claim the Golds in both the 100m Freestyle and the 50m Butterfly, producing another National Record in the Butterfly and taking his tally to 7 Golds at the Games, equaling the record he set 3 years ago in Guwahati, India.

Sandu Savindi too had an incredible swim in the Women’s 50m Butterfly event, establishing another National Record, though she had to settle for the Bronze medal.

Akalanka Peiris shone as he has done all throughout the Games, picking up Bronze medals in both the Men’s 50m Butterfly and the 100m Freestyle, just a few strokes behind Abeysinghe, taking his tally to 7 medals in total in Kathmandu.

The 4x100m Medley relays brought to a close the swimming events at SAG 2019 and what an exciting finale it proved to be.

The Men’s team for Sri Lanka soared to a Silver, but unfortunately were disqualified due to a false start, much to the disappointment of all the Lankan fans. The Women on the other hand, managed to keep their nerve to hold on to a Silver, shaving off nearly 17 seconds off the record of 4.40.72 to end Sri Lanka’s swimming campaign in Kathmandu.

Sri Lanka’s performance in the pool at SAG 2019